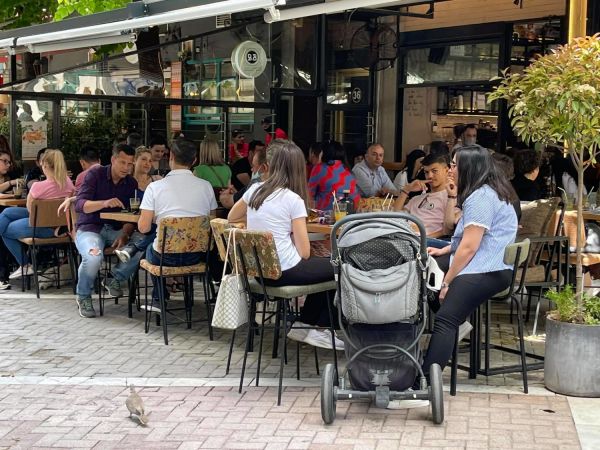 ‘Professional in the restaurant sector do not hide their disappointment about limitations imposed regarding music and the curfew, that require a 22:45 closing time,’ the MPs wrote in the letter

Seven ruling New Democracy MPs have sent a letter to Deputy Minister Civil Protection Nikos Hardalias challenging the government’s decision to ban music at restaurants, cafes, and bars which re-opened today after being shut down for six months, and asking it to revoke the measure and postpone the 22:45 curfew until midnight.

“As of 3 May, for all restaurants and bars the use of exclusively outdoor spaces will be allowed under the conditions that have been set and with only seated customers. Caution. For the duration of the day and their operation music will not be permitted at these establishments,” Hardalias said at a regular, televised health ministry news conference on 28 April.

Athanasios Exadaktylos, the president of the Panhellenic Medical Association and a member of the National Committee on COVID-19, later said, “Music requires a higher voice volume and leads people to come closer in order to be heard and that facilitates transmission. “

The measure drew a backlash from entrepreneurs in the restaurant industry and became the butt of jokes in the Greek social media.

Lefteris Lazarou, a famed chef who owns one of the very popular restaurants in Athens suggested that the decision is bizarre, “Have you ever heard anyone yelling in a restaurant?”

He also criticised the decision to shut restaurants [cafes and bars] at 22:45 and impose a curfew at 23:00, noting that it literally impossible for customers to get home in just a quarter of an hour.

In their letter, the New Democracy MPs cited the consternation of restaurant, bar, and café owners

“Professional in the restaurant sector do not hide their disappointment about limitations imposed regarding music and the curfew, that require a 22:45 closing time. These limitations create obstacles for the re-operation of restaurants and the market in general. It is also certain that the closing time will create crowding on a daily basis when customers leave the restaurant. The possibility arises that this will not avert crowding in houses after the curfew is in place.

Naturally, those restaurants and cafes that re-opened had a substantial number of clients eager to socialise after the six-month shutdown, but many others were still unable to open because of difficulties in stocking up during the Easter holiday season (Greek Easter was on 2 May this year) and after the protracted hiatus.

Some restaurants had already received reservations through August, but it remains to be seen if the turnover and the large number of customers on the first day will continue.

Problems with stocking up, the limited schedule of operation, the ceiling on the number of customers, the hassle of required COVID-19 self-tests for employees, the ban on playing music, and insufficient state subsidies for re-opening were the chief problems with which owners must now grapple.

A critical but as yet unknown factor is how much the epidemiological situation will be burdened by the increased movement of citizens. Customers are not required to wear masks and often those waiting to be seated were not wearing them either.