According to a report in the Turkish daily Milliyet entitled “They are coming in July! 600-metre wall”, despite the American and Nato threats the procurement of the Russian missile system will act as a deterrent in the Aegean 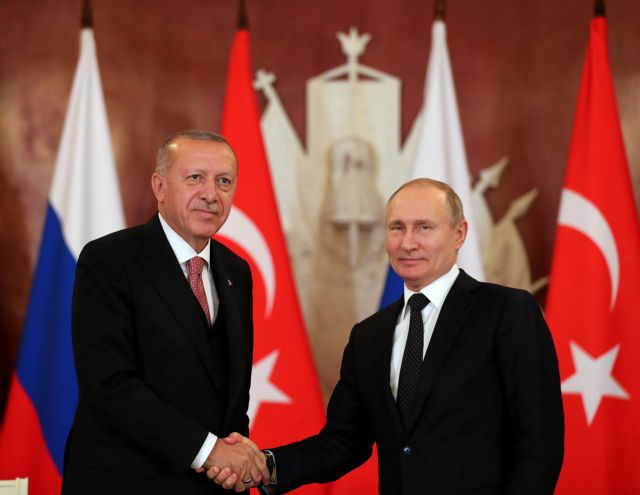 Turkish President Tayyip Erdogan shakes hands with his Russian counterpart Vladimir Putin during a news conference following their talks at the Kremlin in Moscow, Russia April 8, 2019. Cem Oksuz/Turkish Presidential Press Office/Handout via REUTERS ATTENTION EDITORS - THIS PICTURE WAS PROVIDED BY A THIRD PARTY. NO RESALES. NO ARCHIVE

Ankara is digging in its heels on the procurement of super-advanced Russian S-400 surface-to-air missile systems and has declared that it is determined to go ahead with the receipt of the first batch in July and that the system will be used to shield the Aegean and several other areas.

According to a report in the Turkish daily Milliyet entitled “They are coming in July! 600-metre wall”, despite the American and Nato threats the procurement of the Russian missile system will act as a deterrent in the Aegean where the Turkish Air Force is pressured by Greek warplanes and in the Eastern Mediterranean, where Ankara is demanding a chunk of the offshore gas and oil deposits of the Republic of Cyprus. The report said that the acquisition of the missile systems will bolster Turkey’s sovereignty.

The procurement will ratchet up the pressure of the Greek Air Force, all the moves of which will be constantly tracked in real time. The report said that this will allow Ankara to substantially reduce the cost of surveilling the Aegean with its Air Force.

In addition, the Russians are to deliver 128 missiles with various ranges – 40, 120, and 250kms – and others that will be used in alternation. Russia is also examining the possibility of selling missiles with a 400km range to Turkey.
The locations where the missile systems will be placed are being reviewed by the Turkish General Staff and government. It is expected that one missile battery will be stationed at the Akinci Air Base northwest of Ankara, which is where upkeep work for all the batteries will be done.

Other possible locations are the Turkish Straits near the Aegean, the Sea of Marmara near Istanbul, the Mediterranean, southeast Turkey near the Syrian border, and Eastern Thrace near the Greek border.

The report declares that Greece often engages in airspace violations, which is exactly what Athens accuses Ankara of, invoking international law. Turkey has longstanding territorial claims against Greece in the Aegean, including over 100 islets.