PM Tsipras: “Cooperation with Russia is a strategic choice for Greece”

Greek Prime Minister Alexis Tsipras underlined that cooperation with Russia is a strategic choice for Greece, not… 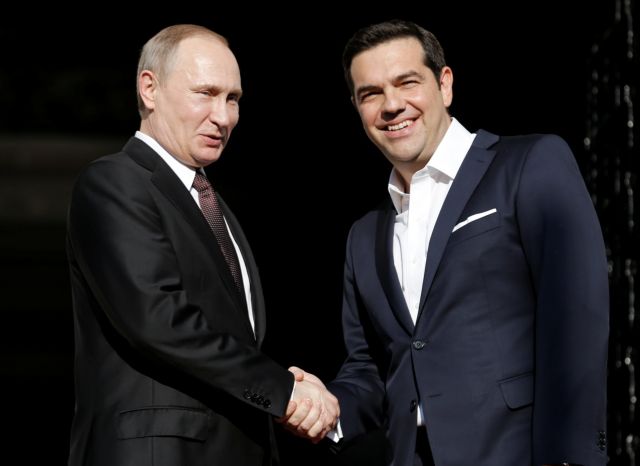 Share
Greek Prime Minister Alexis Tsipras underlined that cooperation with Russia is a strategic choice for Greece, not just due to the historical ties between the two countries, but also because it is an integral aspect of Greece’s active foreign policy, during the press conference with the President of the Russian Federation Vladimir Putin.
PM Tsipras further explained that the Russian President’s visit coincides with the successful completion of the bailout program review, which sets aside the uncertainty. The Greek PM referred to the bilateral agreements signed in energy, tourism, culture, science and technology, adding that energy is a key are for economic development and that Greece’s strategic ambition is to become an energy hub in the region.
Later on the Greek Prime Minister said that he had a very constructive discussion with the Russian President on regional and international developments. PM Tsipras added that a joint declaration was singed that sets the framework for bilateral cooperation and political dialogue on international and regional issues of mutual interest. Further development of dialogue can contribute to improving EU-Russian relations, as well strengthening European security policy within the framework of the OECD. When asked about the Cypriot dispute, the Greek Prime Minister noted that Russia consistently supports a solution based on international law and UN resolutions.
On his behalf, the Russian President highlighted the further development of bilateral relations between the two countries and the importance of the Greece-Russia cross-cultural year. President Putin stated that there is greater room for developing cooperation in energy and investments, while expressing Russian interest in privatizations in Greece, such as TRAINOSE, ROSCO and the Thessaloniki Port Authority. Tourism, he added, was also another major sector where the two can further develop ties.
In relation to Russia’s international policies, President Putin warned that Moscow would not enter any discussions over the situation in Crimea, adding that his country had no other option than to respond to the USA’s missile defense shield in Europe. He also stated that Russia may be forced to take further measures to ensure its security, warning Romania and Poland.
Asked about Russia’s relations with Turkey, President Putin commented that he has not yet heard any explanations from the Turkish leadership, in reference to the shooting down of a Russian fighter jet and pilot. The Russian President stressed that the shooting of the pilot constituted a war crime, but noted that is doing his utmost to restore relations with Turkey.
Finally, the President Putin expressed his belief that Greece can play a role in improving relations between Russia and the EU.
Putin meets Mitsotakis, travels to Mount Athos

Following the press conference, the Russian president visited the Byzantine Museum in Athens and later in the evening he met with the leader of the main opposition, New Democracy PresidentKyriakos Mitsotakis. On Saturday morning the Russian President traveled to Thessaloniki and from then on to Mount Athos.
Bilateral agreements singed ahead of press conference