Armed attack carried out against Israeli embassy in Athens

Counter-terrorism police officers have cordoned off the area around the Israeli embassy in Athens, following an armed attack… 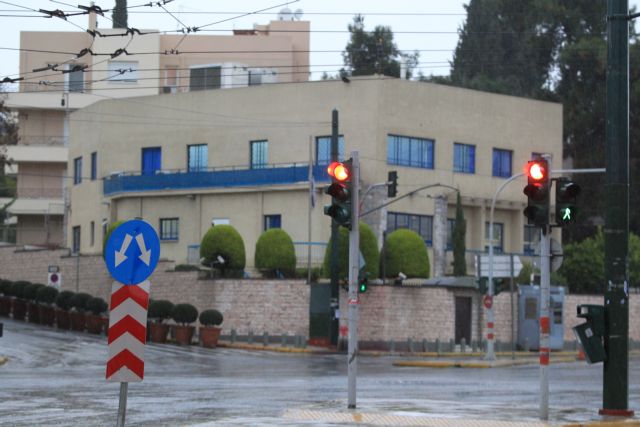 Counter-terrorism police officers have cordoned off the area around the Israeli embassy in Athens, following an armed attack that was carried out at about 3am on Friday. The Police fear a surge of terrorist activity, following the failed bomb attack against a bank on Wednesday.

At about 3am shots were fired from an automatic weapon against the embassy, on Mouson Street where embassy’s entrance is located. The guard noticed the shots immediately and police quickly responded. The official police report notes that so far 54 7.62mm shells were found on site, fired from a Kalashnikov assault riffle. There were no injuries, just damages to the building’s face.

The police are reviewing footage from cameras of the embassy and nearby businesses in an effort to track the movements the assailants made. It is believed that two assailants arrived on motorcycle, accompanied by a support group of two others. The two weapons used in the attack appear to be the same used by the OLA militant group in an attack in December 2013 against the residence of the German ambassador in Halandri.

Preliminary reports suggest that the assailants arrived near the embassy via Psysicho. The shooters may been riding on the back of the motorcycles when they opened fire against the embassy. After shooting, the assailants sped off towards the ring road in Galatsi, avoiding Kifisias Avenue where there are many CCTV cameras.

The Minister of Public Order Vasilis Kikilias arrived at the Israeli embassy shortly after 10:30am and commented that «Greece remains a safe country. The State is against those who are trying to destabilize the situation during such a critical period for the country”. The Ministry of Foreign Affairs also denounced the attack and underlined that the assailants will be brought to justice.

The Ministry of Foreign Affairs issued a statement condemning the attack and stressing that the Greek authorities are determined to ensure the security of all diplomatic authorities. The Ministry also stressed that the relationship between the two countries will not harmed by this assault and that all efforts are made to bring those responsible to justice.

The main opposition party SYRIZA also condemned the attack against the Israeli embassy, noting that that the just Palestinian struggle cannot be served by such unacceptable actions, which the Greek people oppose. The Democratic Left also stressed that the people and country’s democratic forces must isolate terrorism and added that the Palestinian struggle is not served by self-appointed punishers.