A solidarity demonstration is taking place outside the Gennimatas general state hospital, where hunger striker Nikos Romanos is… 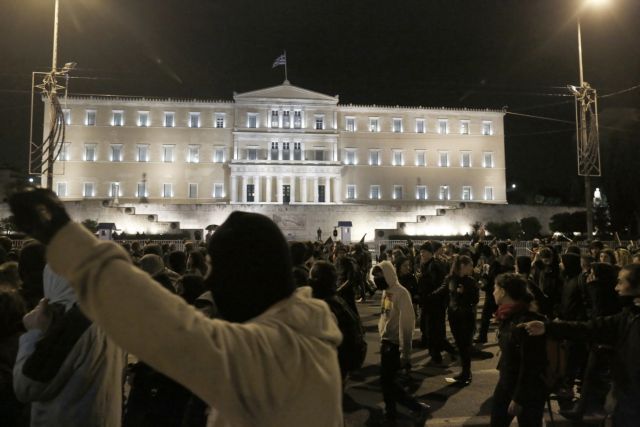 A solidarity demonstration is taking place outside the Gennimatas general state hospital, where hunger striker Nikos Romanos is being held. His lawyer Lila Ragousi announced that Romanos also begun a thirst strike and that the rumors that he had not began a thirst strike were “untrue”.

Romanos, who has been on a hunger strike for thirty days so far in response to not being granted educational leave, is reportedly exhausted and was unable to compose the announcement of his thirst strike on his own. A demonstration is also taking place outside Parliament at noon, during a roll-call vote requested by SYRIZA for a legislative proposal submitted by PASOK.

Government and opposition clash in Parliament

On Tuesday the attorneys of Nikos Romanos announced that he intends to begin a thirst strike, putting his life in direct danger. They explained that Romanos decided to take this decision, as he sense that based on the discussions in Parliament the Minister of Justice has ulterior motives meaning that he has no intention of accepting any of the proposed solutions.

While Romanos has accepted to end his protest, if he were allowed to attend his university studies with an electronic tag, the relevant legislation has not yet implemented. SYRIZA and DIMAR submitted amendments in Parliament on Tuesday, which were rejected by the government on legal grounds.

During the debate in Parliament on Tuesday evening SYRIZA MP Zoi Konstantopoulou stressed that “Romanos is asking for what the State guarantees, the right an education. He was admitted [to the university], you rewarded him and now you act like political crooks. It is fraud. The State has a great responsibility”.

The Minister of Justice Charalambos Athanasiou responded that he does “not see the reason why he cannot follow his course electronically” and argued that the opposition’s amendment on electronic “offered nothing”. Mr. Athanasiou also repeated his claim that the judicial council was responsible for the decision to not grant Romanos an educational leave and hoped that he would end his hunger strike. Regarding the delays in the implementation of electronic tagging, he blamed the companies involved and stated that he has given an order to speed up the process.

On Tuesday evening protesters arranged a demonstration in the evening outside Parliament via the Internet. Hundreds responded to the call, with the hunger striker’s father, Giorgos Romanos, amongst the crowds. The protesters blocked Vas. Sofias Avenue, Panepistimio and Othonos streets and shortly after 22:30 they headed towards the hospital, where Nikos Romanos is being held.