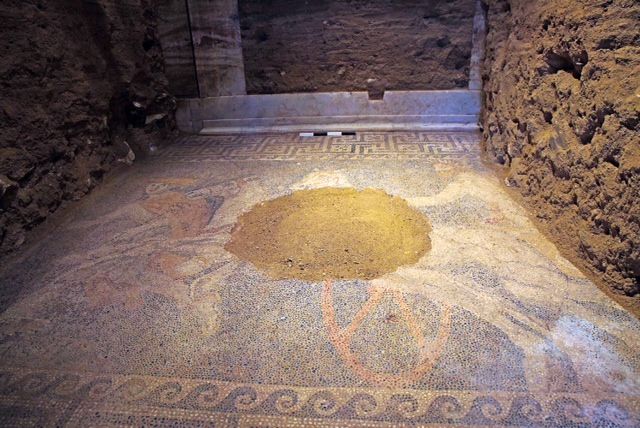 The archeological dig in the mysterious tomb of Amphipolis has revealed an impressive mosaic on the floor in the second chamber, which could point towards the identity of the person entombed.

The mosaic was located in the area behind the Caryatid statues of the tomb and was constructed by using small pebbles in white, black, grey, blue, red and yellow colors. A part of the mosaic has been damaged, but experts believe they will be able to restore part of it as pieces were found in the dirt.

The mosaic depicts a chariot with two white horses being led by Hermes, the psychopomp God who escorted deceased souls from Earth to the afterlife. A bearded man wearing a laurel wreath on his head is depicted on the chariot, with experts estimating that he may represent Hades or point towards the identity of the tomb’s resident.

As the Amphipolis tomb proves to be unique, dating it has sparked a heated debate amongst archeologists. The techniques used in the mosaic however suggest that the tomb was constructed in the last quarter of the 4th century BC. According to the latest press release from the Ministry of Culture, the archeological team has not fully uncovered the mosaic and that additional parts of the marble doors were located during the latest excavation efforts.