Vartholomeos to Kirill: ‘You should resign’

‘If need be, he should sacrifice his throne to tell Putin, “Mr. President, I cannot agree with you and I am resigning,’ the Ecumenical Patriarch declared. 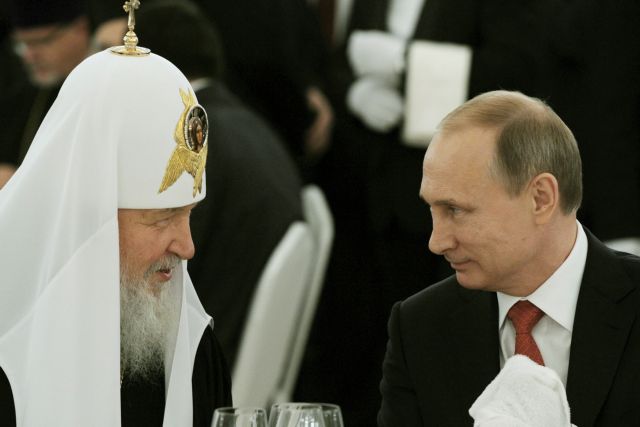 “It should have been impossible for all Churches not to condemn violence and war. The Russian Church disappointed us. I would not have wanted the Russian Church and my brother, Patriarch Kirill, to constitute such a tragic exception. I do not know how he can justify it to his conscience,” Vartholomeos said in an interview with Greece’s ERT public television.

“I would have expected of my brother Kirill to rise to the occasion at this critical, historic moment. If need be, he should sacrifice his throne to tell Putin, “Mr. President, I cannot agree with you and I am resigning,” the Ecumenical Patriarch declared.

Pope Francis to Kirill: ‘Do not be Putin’s altar boy’

In an interview published on 3 May in Corriere della Serra, Pope Francis offered much more scathing criticism of Kirill, calling upon him not to be Putin’s “altar boy”.

“The patriarch cannot transform himself into Putin’s altar boy,” the pope said.

Pope Francis said that during a 16 March 40-minute Zoom conversation, Kirill listed all the supposed justifications for the war from a sheet of paper.

“I listened and then told him: I don’t understand anything about this,” Francis said. “Brother, we are not state clerics, we cannot use the language of politics but that of Jesus. We are pastors of the same holy people of God. Because of this, we must seek avenues of peace, to put an end to the firing of weapons.”

The role of the Ecumenical Patriarch

In the Eastern Orthodox Church, centuries-old Church Canons and tradition have a given number of powers to the Archbishop of Constantinople, including the granting of autocephaly (administrative independence) to Orthodox Churches around the world, convening pan-Orthodox Councils, and convening Church Councils with the heads of other autocephalous Churches to resolve crises both within and between them.

It was Vartholomeos’ move in January, 2019, to grant autocephaly to the Orthodox Church of Ukraine, with a patriarchal decree called a “tomos”, after decades of demands from the country’s faithful to become independent of the Moscow Patriarchate, which led Kirill to essentially declare war on Vartholomeos, with all Russian Orthodox churches ceasing to commemorate the Ecumenical Patriarch.

The Moscow Patriarchate and Vladimir Putin have since continually attacked Vartholomeos, calling him a pawn of the Americans.

Orthodox faithful in Ukraine are split, with more than half of the country’s parishes (with the number growing since the Russian invasion) under the jurisdiction of the autocephalous Church, led by Archbishop Epihanius I of Kyiv and All Ukraine.

The rest of the parishes remain in the Church under the jurisdiction of Moscow, which is led by Metropolitan Onufriy.

Many of the parishes, however, have stopped commemorating their spiritual leader, Kirill, due to his support for the war, which has claimed the lives of many members of the flock.

Putin in the past went as far as to claim that Vartholomeos was paid off by Washington to recognise the independence of the Orthodox Church in Ukraine.

Both in Soviet times and, especially, during Putin’s two decades in power, the Moscow Patriarchate has been perhaps the Kremlin’s most powerful soft power tool globally, meddling in the affairs of other autocephalous Churches in the Balkans, Jerusalem, Africa and elsewhere, and continually seeking to expand its influence within them by wooing Metropolitan bishops with various means to adopt its positions.

According to Soviet archives, Kirill was an active KGB agent, as was his predecessor, Patriarch Alexei.

It has also sought to vastly expand its influence in Greece’s 1,000-year-old male monastic colony of Mount Athos, considered the ark of Orthodox mystical spirituality, where the Russian Monastery of Saint Panteleimon has long been reputed to be a hotbed of Russian intelligence activity in Greece and the Balkans.

Following the 24 February Russian invasion of Ukraine, Greek Police beefed up policing on Athos, with the local police force now reporting directly to the state police security bureau in Thessaloniki and through it to the chief of Greek Police in Athens.

The big business of the Moscow Patriarchate

In 1994, the government granted the Russian Church the right to import thousands of tonnes of tobacco duty free.

Moreover, Kirill is reputed to be one of the wealthiest men in Russia.

On 4 May, the  European Commission targeted Kirill in its sixth package of sanctions against Russia.

A European External Action Service document stated, according to a report by Politico, that «Kirill has been ‘one of the most prominent supporters of the Russian military aggression against Ukraine’ and a key player in amplifying Russian President Vladimir Putin’s rhetoric on Ukraine».

«The Commission highlighted a series of pro-war sermons and remarks by Kirill in the months since Russia’s lethal invasion began in February — plus his blessing for Russian soldiers fighting in Ukraine,» the report stated.