Tests confirmed that both women who developed thrombosis after the AstraZeneca vax tested positive in a test of a substance that is an indicator of haemorrhage and thrombosis. 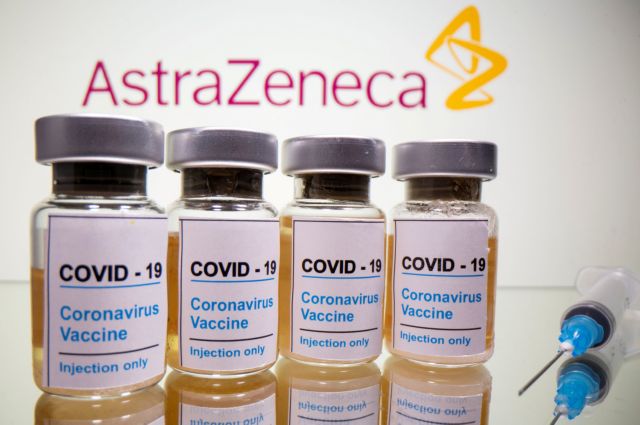 FILE PHOTO: Vials with a sticker reading, "COVID-19 / Coronavirus vaccine / Injection only" and a medical syringe are seen in front of a displayed AstraZeneca logo in this illustration taken October 31, 2020. REUTERS/Dado Ruvic/File Photo
Share

There is a likely link between the AstraZeneca COVID-19 vaccine in the cases of two women, the one 35 and the other 44-years old, in Crete who were diagnosed with thrombosis according to an initial report from the Pharmacovigilance Committee of Greece’s National Organisation for Medicines (EOF).

According to a report broadcast on Open television, the committee held an emergency meeting and experts agreed on tentative report that states there is a likely link of the Astrazeneca vaccine to the two thrombosis cases.
The 44-year old woman is still being treated at the University General Hospital in Iraklio, Crete.

The experts on the committee reached their conclusion as they had been orally briefed about the cases. They confirmed that both women tested positive in a test of a substance that is characteristic of haemorrhage and thrombosis.

When the committee receives the test results in writing it will issue its final report.

Meanwhile, clinical tests are still being performed on a 47-year-old woman.

Some members of the committee reportedly expressed concerns regarding the frequency of cases.

There is as yet no indication whether the health ministry might recall the batch of AstraZeneca vaccines distributed in Crete.

Unlike other countries such as the UK, Greeks when vaccinated are not supplied with the batch number.