‘We hope they’ll be real conversations [between Turkey and Greece] and we hope the military assets that are there will be withdrawn so these conversations can take place,’ said the US Secretary of State. 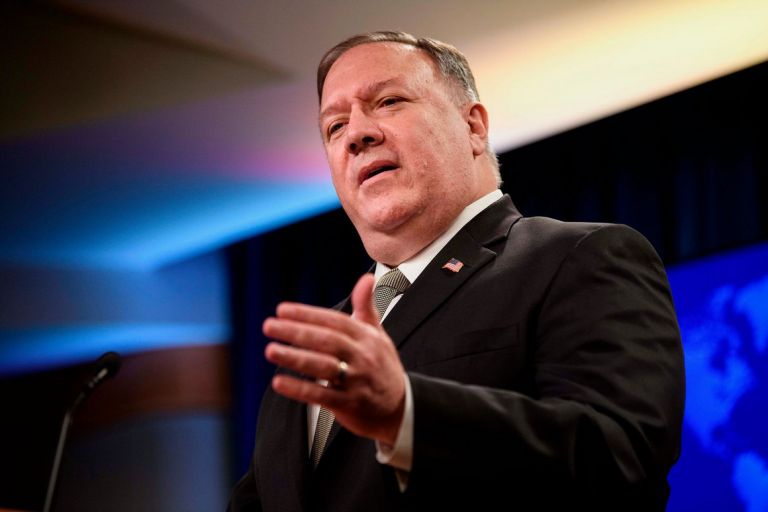 US Secretary of State Mike Pompeo will be visiting Cyprus tomorrow for talks with President Nicos Anastasiades regarding Turkey’s row with the Republic of Cyprus and with other countries in the Eastern Mediterranean over maritime jurisdiction.

After the recent arrival of Greek warplanes on Cyprus undoubtedly Cyprus’ defence will be high on the agenda.

Ankara’s provocations with the issuance of a series of NAVTEXs in areas claimed by Greece under international law and the presence of the oil and gas exploration ship Oruc Reis in the area of the Greek continental shelf have proven an explosive mixture.

The Secretary of State made his remarks on a flight to Doha, Qatar.

Pompeo urged all sides to withdraw their warships from the area so that a fertile dialogue can begin on the right footing.

He also praised Germany’s as yet unsuccessful efforts to get Turkey and Greece to dialogue.

Greek Prime Minister Kyriakos Mitsotakis has repeatedly declared that dialogue is inconceivable before Turkey withdraws its forces from the area. He clearly ruled out the concept of diplomacy at gunpoint.

Pompeo on the aeroplane in a gaggle with journalists referred at some length to the Eastern Mediterranean conflict and the importance of reaching a peaceful resolution through dialogue.

Secretary Pompeo’s remarks follow:
“It’s also the case that the things that are taking place today in the Eastern Mediterranean are important and I want to have a chance to talk with the leaders there in Cyprus about their perspective, their objectives, the things they would like to do. The President’s been very clear and he’s asked – he’s spoken with President Erdogan, he’s spoken with Prime Minister Mitsotakis, and in each case he’s said this has to – the disputes, the maritime disputes have to be resolved in a way that is diplomatic and peaceful. And so I’ll be working on that project as well, trying to make sure that I understand the risks that are associated from the people of Cyprus’s perspective and take that on board as we continue to work on the challenges that the Eastern Mediterranean is presenting today. It’s something we’re very focused on. The Germans have done a good job trying to diplomatically get them to begin their conversations about how to proceed. We hope they’ll be real conversations and we hope the military assets that are there will be withdrawn so these conversations can take place.”