In a surprise move, the government in the next few days will deposit 5.5bn euros in an escrow account as “an extra guarantee” to ensure creditors that it will honour its primary surplus targets for 2020, 2021 and 2022. 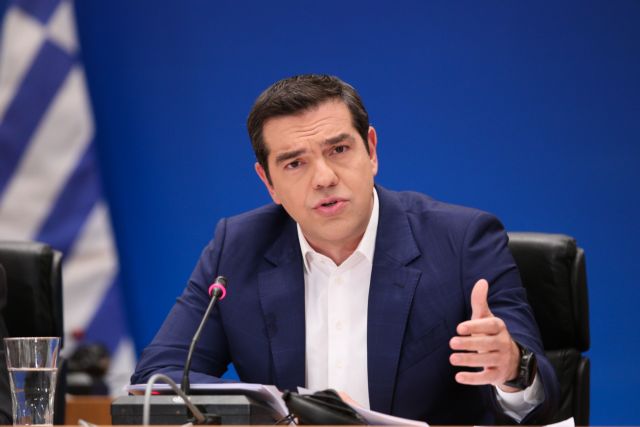 Prime Minister Alexis Tsipras this evening announced a series of fiscal measures from tax cuts and social benefits to a large escrow account that will guarantee to Greece’s creditors that the debt will be serviced fully for the next three years.

In a surprise move, the government in the next few days will deposit 5.5bn euros in an escrow account as “an extra guarantee” to ensure creditors that it will honour its primary surplus targets for 2020, 2021 and 2022.

The extra assurance is in part an insurance policy that social benefits and handouts that are already being disbursed will not derail the economy and impede the servicing of Greece’s debt.

The VAT tax on food and restaurants will be slashed from 24 percent to 32 percent.

An over 50 percent cut of taxes on electricity and gas bills for households and enterprises, from the current 13 percent to six percent, is expected to be a major boost for Greek businesses.

The PM said that the parliamentary confidence vote in the government on May 10 and the May 26 local and European Parliament elections should be viewed as a referendum on the fiscal package that he announced at today’s nationally televised news conference.

Accused in advance that the measures that were to be announced were simply hollow electoral pledges, Tsipras said these are permanent measures which were made possible by a 30bn euro reserve which comes from the 15bn euros given Greece by creditors as a cash buffer and the other 15mn derives from the sacrifices of the Greek people.

He also underlined the benefits of paying off early 3.6bn euros in high-interest debt to the IMF, as he said Greece now has its lowest borrowing rate ever from the markets.

The PM said that the government will not squander the 30bn euros in the state coffers but that the time has come for a part of it to be exploited through measures to stimulate growth and to relieve those who have borne the brunt of the crisis – the working class and pensioners – through high taxes, wage and pension cuts, and unemployment.

Half a monthly pension as bonus annually

One of the measures that had been talked about exhaustively in recent weeks was a 13th  monthly pension annually.

New Democracy leader Kyriakos Mitsotakis has said that an extra pension is unfeasible and hence a populist move.

Stressing that pensioners were hardest hit by crisis, Tsipras said the related bill will be introduced as a permanent measure, which will be up to half a monthly pension annually.

He said that in 2019 this be paid for with an additional 800mn euros over and above what had been projected in fiscal space, and will be passed into law in the coming days. He said the expenditure can be covered in the coming years as well.

The amount will be disbursed immediately, just days before crucial elections.

Other measures include tax cuts for residents of islands with fewer than 3,100 residents, and a 10 percent cut in taxes on agricultural cooperatives.