Ankara declares it will protect ‘Turkish minority’ in Thrace

Maintaining that Ankara is attempting to solve problems with Greece through dialogue, Aksoy demanded the extradition to Turkey of individuals allegedly related to the “Gulenist” movement 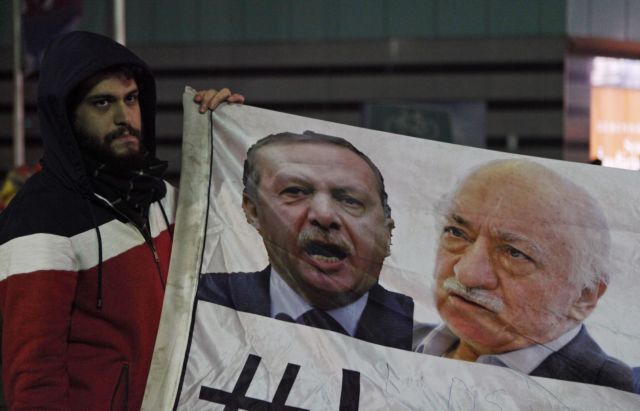 A demonstrator hold pictures of Turkey's Prime Minister Tayyip Erdogan and Turkish cleric Fethullah Gulen (R), during a protest against Turkey's ruling AK Party (AKP), demanding the resignation of Erdogan, in Istanbul December 30, 2013. Erdogan swore on Sunday he would survive a corruption crisis circling his cabinet, saying those seeking his overthrow would fail just like mass anti-government protests last summer. Gulen denies involvement in stirring up the graft case, but he regularly censures Erdogan, a ex-ally with whom he fell out in a dispute for control over an influential network of Turkish cram schools. REUTERS/Osman Orsal (TURKEY - Tags: POLITICS CRIME LAW CIVIL UNREST)
Share

While Greece is debating possible vestiges of irredentism in the Greece-FYROM naming accord, Turkish Foreign Ministry spokesman Hami Aksoy declared that Ankara is the protector of the “Turkish minority” in Western Thrace.

Under the Treaty of Lausanne a Muslim and not Turkish minority is recognised in the region, as it includes Muslim Pomak and Roma elements.

Maintaining that Ankara is attempting to solve problems with Greece through dialogue, Aksoy demanded the extradition to Turkey of individuals allegedly related to the “Gulenist” movement, of the Muslim cleric Fetullah Gulen who created a network of Islamic schools and had managed to penetrate high levels in various sectors of the Turkish state, including the military and judiciary.

Erdogan has conducted a wholesale purge and imprisonment of alleged Gulenists.

An erstwhile ally of Turkish President Recep Tayyip Erdogan, Gulen has been branded a terrorist and his movement a terrorist organisation by Ankara, which accuses him of masterminding the abortive “coup” against Erdogan in 2016.

“With Greece we are attempting to solve problems through dialogue. We shall continue to decisively demand from Athens the return of all those linked with the terrorist organisation FETO (as Ankara calls Gulen’s Hizmet movement) and to protect the rights of the Turkish minority in Western Thrace,” Aksoy said.

Aksoy said that the Cyprus problem can be solved only if it is done on the basis of the existing realities on the island and if the Greek Cypriots comply with Ankara’s view of power-sharing.

Turkey has occupied nearly 40 percent of the island since 1974, when over 80 percent of the population were Greek-Cypriots and demands that the majority and the Turkish-Cypriot minority have equal representation and a decisive say in all state organs and institutions.