Editorial: An opportunity for Mitsotakis, a lesson for Tsipras

Yesterday’s elections brought to a close a cycle of governance during which shilly-shallying on a series of crucial decisions and reforms was the order of the day. 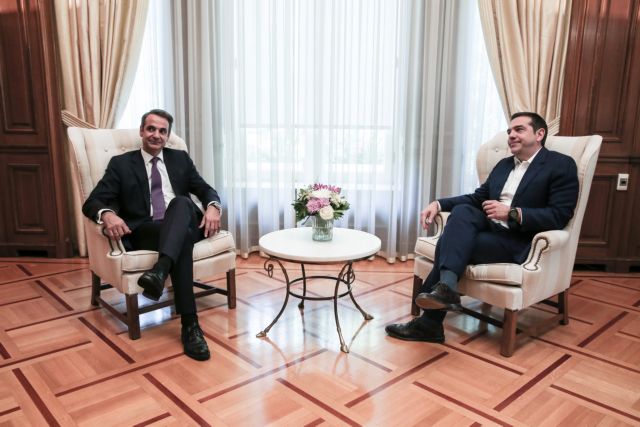 The result of yesterday’s general election is a great victory for New Democracy and for Kyriakos Mitsotakis personally.

Greek citizens handed him a strong majority in order to deliver on what he had promised during the campaign.

Yesterday’s elections brought to a close a cycle of governance during which shilly-shallying on a series of crucial decisions and reforms was the order of the day.

Still, the fact remains that SYRIZA and Alexis Tsipras personally held on to the bulk of voters that had entrusted the country’s governance to them in 2015.

Despite SYRIZA’s huge defeat in the 26 May European Parliament election, the party managed to regroup and retain an absolutely hegemonic position in the opposition.

The centre-left Movement for Change slightly improved its European election results but it lacks the dynamic to challenge SYRIZA’s predominant position in the opposition.

Following the political adventures of the decade-long crisis, one sees a clear return to two-party hegemony, though it remains to be seen whether it will prove to be as durable as the Pasok-ND hegemony of past decades.

An exceptionally important result of the election is the shrinking of Golden Dawn.

The neo-Nazi political grouping has been driven by voters to the margins of political life where it belongs.

One must also note, however, that parties founded on irrational premises have survived and were able to enter Parliament.

The country’s path in the aftermath of the election will be determined primarily by the political choices and tactics of the new government.

Mr. Mitsotakis will have a short grace period, but he will soon have to prove that he can truly guarantee the return of the economy and of society to normalcy as he has pledged.

The task is neither simple nor easy. There are great expectations and small endurance.

Beyond the government’s choices, Mr. Tsipras’ stance as main opposition leader will play a decisive role.

It remains to be seen whether his term in office has made him more mature and responsible or whether he will as he has done in the past adopt extreme opposition tactics after a temporary – as he said – loss of power.

Citizens with their vote yesterday chose to have both a strong government and a strong opposition.

They hope and expect that both major parties will carry out the task assigned to them with responsibility, with seriousness, and with a view to the more general national interest.