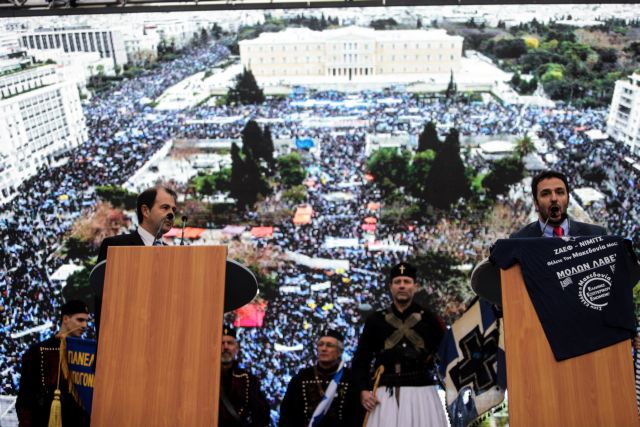 Main opposition New Democracy has called the government to task for not being able to maintain order at yesterday’s major rally against the Greece-FYROM Prespa Agreement.

In a statement issued today ND poses a series of questions about the political and operational decisions that permitted a large and peaceful rally to spin out of control.

It suggests that the hooded hoodlums who wreaked havoc by attacking riot police and protesters in the crowd had the tacit consent of the government, as the competent Citizen’s Protection Ministry did not take the necessary precautions to prevent infiltration of the demonstration by violent elements.

The three overarching questions posed by ND verbatim were as follows:

1. “Why did the Citizen’s Protection Ministry [which has authority over police] permit this particular group to reach the Tomb of the Unknown Soldier even though everyone for a long while watched these hooded individuals walking around the capital with steel rods and wooden rafters?

2. Why is it that despite the fact that 2,000 policemen were assigned the task of keeping order at the rally they did not capture and arrest these people, when just recently they hauled in peaceful citizens when they raised a banner against the Prespa Agreement opposite the Megaro Mousikis where Mr. Tsipras was to deliver a speech?

3. In the final analysis, who ordered riot police to choke with expired tear gas thousands of families, small children and elderly people, when such an action is considered inconceivable with tightly packed crowds and when it was a miracle that even worse results were averted?

The authoritarian government of Mr. Tsipras can no longer hide. New Democracy is releasing photographs that show specific thugs with their faces covered walking unimpeded considerably before their planned attack. These photographs and subsequent events clearly reveal that the government is using even the police to serve its petty partisan aims,” the statement read.

‘Competent ministers should have resigned’

New Democracy also lambasted Citizen’s Protection Minister Olga Gerovasili and Deputy Minister Katerina Papakosta for not resigning and attacked Greek Police brass for “executing an unacceptable order to throw dozens of tear gas canisters next to thousands of peaceful protesters with the obvious aim of breaking up the protest”.

The opposition rejected as ridiculous the government’s claim that it did not denounce the incidents because New Democracy “diachronically and always condemns violence from whatever quarter”.

Moreover, it asked the government rhetorically why the fascist Golden Dawn member who killed rapper Pavlos Fyssas is still free and why the trial of Golden Dawn as a criminal organisation has not finished after four years.