Electronics retailer Electroniki S.A. announced on Wednesday that it has gone bankrupt and will immediately suspend its operations… 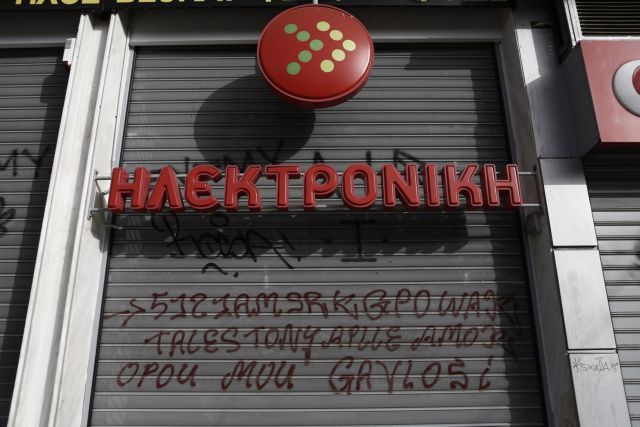 Electronics retailer Electroniki S.A. announced on Wednesday that it has gone bankrupt and will immediately suspend its operations, with its stores remain closed on Thursday.

According to a statement issued by the company management, the bankruptcy came as a result of the overall progress of the economy, the capital controls and significant drop in consumer purchasing power.

The management further explained that despite the efforts and coordination with banks, suppliers and shareholders, the company’s liquidity problem grew worse, particularly after June 2015.

The announcement came as a shock to the company’s 450 employees, who claim that they had not been informed in the slightest over the management’s intentions and found out about the dramatic developments through the media.

Employees have gathered outside the company’s store in Peristeri, demanding severance pay. The employees have also formed a committee and arranged to meet with the company management at the Ministry of Labor in an effort to find a solution.

Employees gathered outside the Athens Chamber of Commerce and Industry (EVEA) , during a press conference held by the company’s management and caused a commotion.

The employees were eventually allowed to enter the building and proceeded to interrupt the company owner’s press conference. A meeting between employees and management was arranged for next week.

The dramatic announcement prompted reactions from the opposition parties, with the River underlining that the government’s “anti-growth policy, hostility towards private initiative and capital controls” are causing businesses to shut down on a daily basis.

New Democracy also blasted the coalition government, citing recent statements by Deputy Minister of Foreign Affairs Dimitris Mardas, who claimed that “there are no problems in the economy due to the capital controls”. According to the main opposition party, the govenment has lost control.