“We are faced with a multi-faceted crisis, in the economy, security and of course migration” and argued PM Alexis Tsipras upon… 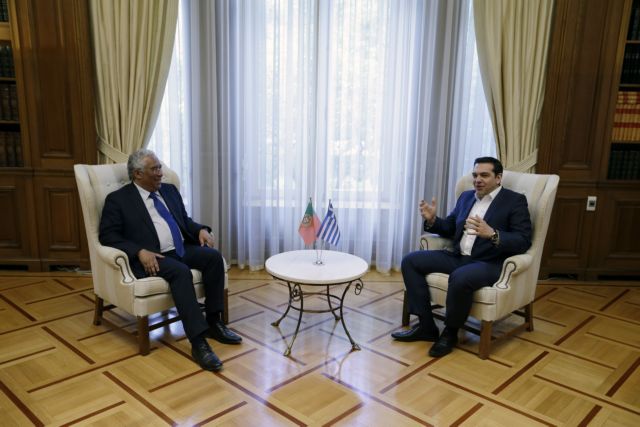 “We are faced with a multi-faceted crisis, in the economy, security and of course migration” and argued PM Alexis Tsipras upon receiving his Portuguese counterpart Antonio Costa at Maximos Mansion in Athens.

The Greek Prime Minister added that “all of these difficulties force us to move forward” in order to promote an ‘alternative’ agenda, with «solidarity, social cohesion and democracy” at the focus.

Reports suggest that the two Prime Ministers will sign a joint declaration regarding the future of Europe and in support of developing bilateral relations. A press conference will follow.

Prior to the meeting at Maximos Mansion, the Portuguese PM met with President Prokopis Pavlopoulos, where he reiterated his solidarity towards the Greek people in relation to the refugee crisis.

In a letter to PM Tsipras and other European leaders, the Portuguese Prime Minister announced that his country is prepared to accept up to 6,000 refugees from Greece, on top of what it has already agreed to receive, as part of the European plans.

The Portuguese government has expressed its intention to put an end to the policy of austerity, but introducing a budget that repeals many of the austerity measures taken in the recent years. This sparked reactions with the European Commission, which reluctantly approved of the new budget.