Kammenos: “No vote of confidence for Mouzalas from Independent Greeks” 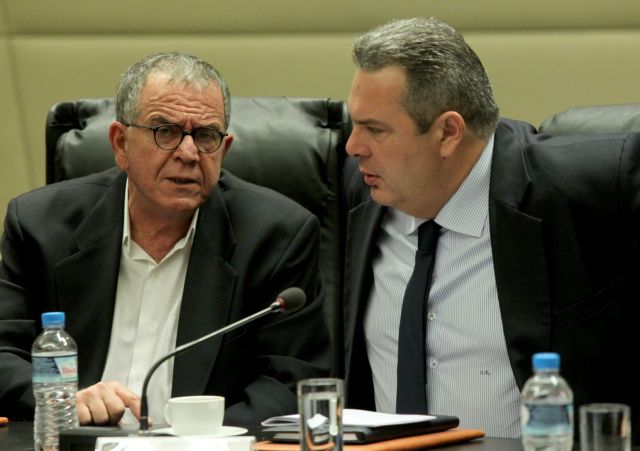 The leader of the Independent Greeks and Minister of National Defense Panos Kammenos repeated his statement that his party will not support Yannis Mouzalas and noted that whether the Alternate Minister of Migration Policy resigns or not is his matter.

Earlier, Mr. Kammenos had called a parliamentary group meeting for Thursday morning, in order to discuss the controversy surrounding the recent remark of Yannis Mouzalas on FYROM. The Independent Greeks debatd their options, should Mr. Mouzalas remain in place.

Mr. Kammenos has demanded the resignation of Mr. Mouzalas and discussed the affair with Prime Minister Alexis Tsipras on Wednesday. According to government sources, the coalition government partners will discuss the matter again after the critical summit meeting in Brussels. This development has increased the tension amongst the coalition partners, to the point that Mr. Kammenos has even canceled a scheduled trip to the USA.

This is highlighted by the decision of the National Defense Minister to call the leaders of the Armed Forces to discuss the latest political developments. It has also been rumored that associates of Mr. Kammenos have been clearing out their offices at the Ministry of National Defense, in anticipation of the Independent Greeks leaving the coalition government.

In spite of the nature of Mr. Mouzalas’ remark that sparked the controversy, there has been support for the Alternate Minister of Migration. Aside from the River supporting him, Independent Greeks MP Kostas Zouraris differentiated himself from his party, recognizing that Mr. Mouzalas simply made a verbal mistake.