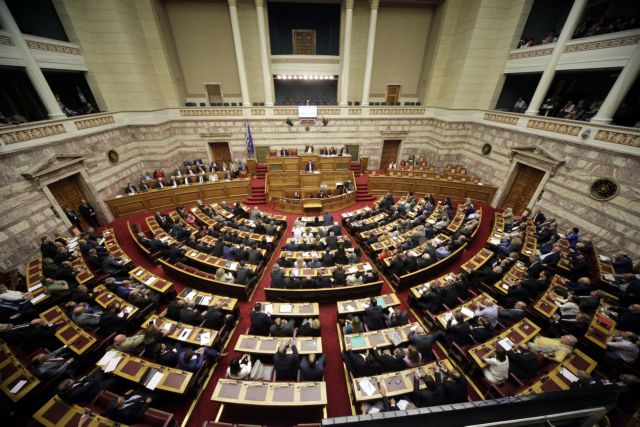 The debate in Parliament over the government’s policy statements continues on Tuesday with ministers and MPs from all parties delivering speeches. The process, which began on Monday, will conclude at midnight on Wednesday with a vote of confidence.

Watch the proceedings in Parliament (live)

Μany of the opposition parties declaring that they will not provide “a single day of grace” and that the SYRIZA/Independent Greeks coalition is ‘on its own’.

New Democracy MP Olga Kefalogianni underlined that “the lies are over” and that her party will exercise strict, structural criticism, as the main opposition party. Similarly ND MP Kostas Tasoulas claimed that the government’s plans will bring further recession and unemployment.

Likewise, in commenting on the government’s policy statements, PASOK MP Andreas Loverdos cited the early 20th century statesman Eleftherios Venizelos that “we are failing enthusiastically”. Mr. Loverdos warned the government that I may have received the people’s grace, but “the time will come when [it] will be punished harshly by the people”. He also announced that he will vote against the government, rejecting the Prime Minister’s call for “the broadest possible consensus of the country’s progressive forces”.

From the River MP Spyros Lykoudis accused the government of “not being in the position to have an honest political discussion”, who added that “you will govern alone and be judged alone”. The Communist Party’s Nikos Karathanasopoulos accused the government of continuing it’s the ‘anti-people policies’ of recent years and claimed that its goal is to protect the profits of monopolistic groups.

Although the Union of Centrists has stated it will not exhaust itself as a sterile opposition party, MP Marios Georgiadis noted that “we will not participate in the government’s existential pursuits” and called the government to boldly carry out the necessary reforms. The MP for neo-Nazi party Golden Dawn Ilias Kasidiaris spoke of an “operetta government” and lashed out against the government for housing “illegal immigrants” in the former Olympic facilities.