In his speech at the General Assembly of the United Nations, Greek Prime Minister Alexis Tsipras referred to the ‘triple crisis’ that… 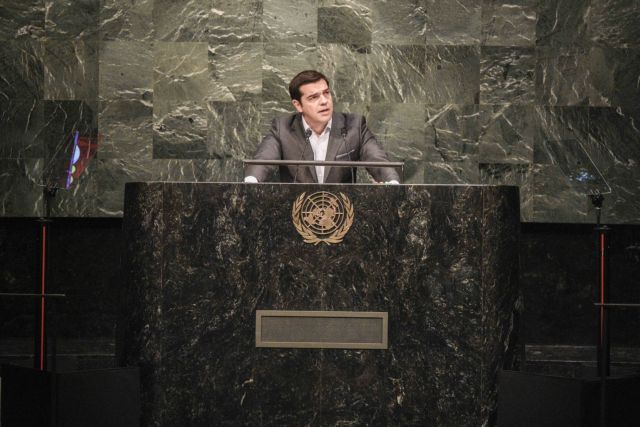 In his speech at the General Assembly of the United Nations, Greek Prime Minister Alexis Tsipras referred to the ‘triple crisis’ that Greece is currently facing, namely the financial, refugee and security crises.

Mr. Tsipras told the UN General Assembly that Greece, just like other countries, was greatly affected by crisis in 2008 due to the structural weaknesses of the economy of high debt and deficit. According to Mr. Tsipras, the ‘neoliberal recipe’ rather than cure the serious financial crisis. Although a new bailout program with deep reforms has been agreed to help stabilize the economy, Prime Minister Tsipras argued that Greece needs a growth agenda, rather than further austerity.

Regarding the refugee crisis, Mr. Tsipras stressed that Greece has done everything possible to welcome and accommodate refugees and denounced the creation of walls and use of violence to repel refugees and migrants. The Greek PM underlined that “our ancestors were refugees and migrants and we cannot allow racism and xenophobia to destroy our common values” and called for greater support for countries neighboring Syria, in order to help the refugees.

The Greek PM then addressed the security crisis, in relation to the refugee crisis and noted that Greece was in the center of a ‘triangle of destabilization’ between Ukraine, Libya and the Middle East. Mr. Tsipras supported the creation of a Palestinian state, based on pre-1967 borders, with East Jerusalem as its capital and argued that it must peacefully co-exist with Israel.

Later on Mr. Tsipras addressed the Cypriot dispute and commented that it is encouraging that there was a drive for a mutually-accepted, fair, sustainable and overall solution, based on United Nations resolutions. He stated that “it is shameful” that Cyprus has remained divided for 41 years and argued that Greece is making constant efforts to improve relations and cooperation with Turkey.