PM Tsipras arrives in Moscow for talks with President Putin

The Prime Minister Alexis Tsipras arrived in Moscow for a two-day official visit on Tuesday afternoon, after being invited by… 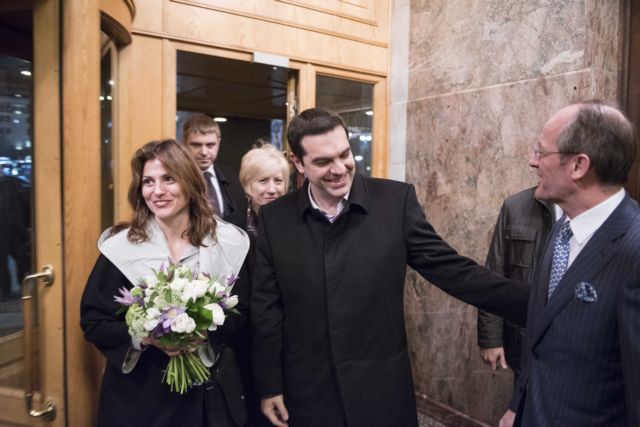 The Prime Minister Alexis Tsipras arrived in Moscow for a two-day official visit on Tuesday afternoon, after being invited by Russian President Vladimir Putin. According to the press spokesperson of the Russian President Dimitry Peskov, all aspects of the multileveled relationship between the two countries will be discussed, not excluding the Greek debt.

Russia’s acting Minister of Finance Anton Siluanov dismissed talks of “new loans”, arguing that since no such requests have been made, there is no such discussion set to take place. Similarly, the Russian Minister’s aid Svetlana Nikitina noted that no meetings have been arranged with the Greek PM.

The possibility of a loan from Russia has not been ruled out, as evident by a report in financial Russian daily Kommersant. The newspaper report associates the possibility of a loan with a planned discount on natural gas supplied to Greece. The report cites Russian officials, who seem prepared to consider a loan, as well as the acquisition of assets in Greece. TRAINOSE and the port of authority of Thessaloniki are of particular interest to Russia.

Meanwhile, the Russian Minister of Agriculture Nikolai Fyodorov told the TASS new agency that there is possibility of excluding Greece (along with Cyprus and Hungary) from the embargo it has enforced in the importation of food products from the West. An agreement during Mr. Tsipras’ visit in Russia is unlikely though.

On Wednesday Mr. Tsipras will visit the Monument of the Unknown Soldier where he will lay a wreath at 10am and at 1pm he is scheduled to meet the Russian President Vladimir Putin in the Kremlin. The meeting between the two leaders will last about an hour. Delegations from both sides will enter official talks and sign bilateral agreements, followed by a joint press conference with the two leaders. Mr. Tsipras will meet with the presidents of expatriate groups.

On Thursday the Greek Prime Minister will deliver a speech on Greek and Russian relations at the Moscow State Institute of International Relations (MGIMO). He will then meet with the Chairman of the State Duma Sergey Naryshkin, Prime Minister Dmitry Medvedev and Patriarch Cyril of Moscow.