The cleaners who have been protesting their suspension for months occupied the Ministry of Finances offices, after entering the building… 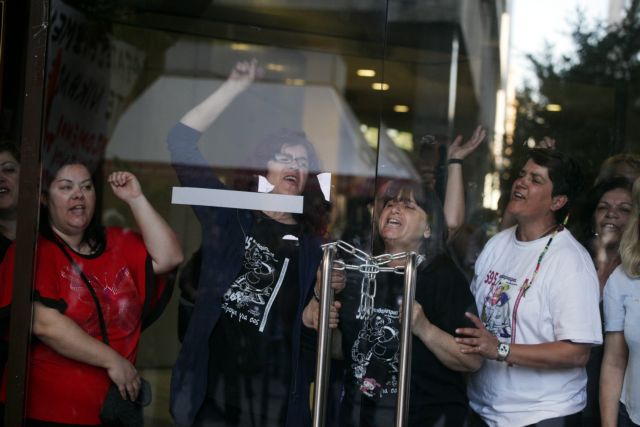 The cleaners who have been protesting their suspension for months occupied the Ministry of Finances offices, after entering the building and locking the door with a chain.

The police dispatched riot units to the occupied Ministry, with the supervising officer giving the cleaners a two-hour deadline to evacuate the building before they are forcibly removed.

Last week First Instance Court of Athens ordered the Ministry of Finances to reappoint the 397 cleaners, as it found their suspensions to be illegal.

Unionist and SYRIZA MEP candidate Konstantina Kouvena, who had been hospitalized after she was attacked with acid for her unionist activism, arrived at the occupied Ministry at 10am.

Mrs. Kouneva commented on ANT1 that the General Secretary of Public Revenue Harris Theoharis announced that he refuses to implement the court order and claimed that the decision was politically motivated. The legal representative of the suspended cleaners responded that there was absolutely no legal excuse to not implement the order.

The Minister of Finances Yannis Stournaras has appealed to the Supreme Court, as the court order could set a dangerous precedent regarding the implementation of the coalition government’s suspension plans.

In response, the Panhellenic federation of public finance employees (POE DOY) has filed a complaint demanding from the prosecutor to investigate criminal liability for breach of duty and failure to comply with a court order.