The Prime Minister and leader of New Democracy Antonis Samaras gave a televised interview on ANT1 on Tuesday evening, where he stressed that… 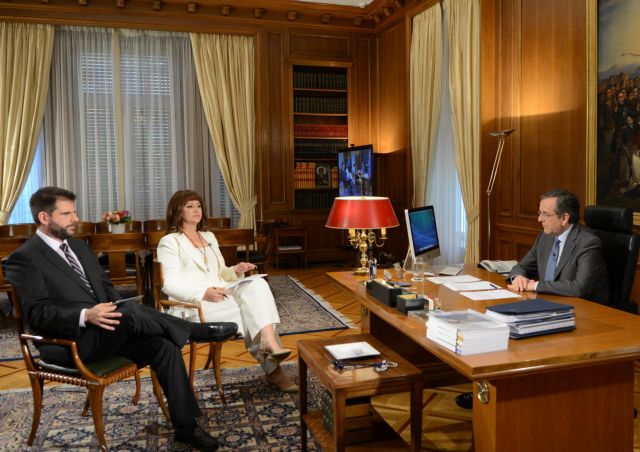 The Prime Minister and leader of New Democracy Antonis Samaras gave a televised interview on ANT1 on Tuesday evening, where he stressed that the results of the upcoming elections will help the country overcome the crisis.

Mr. Samaras denied allegations that a new bailout will be introduced after the election or that new austerity measures and taxes will increase. The PM focused a lot of his time criticizing SYRIZA, often attacking its leader Alexis Tsipras on a personal level. Mr. Samaras estimated that “Mr. Tsipras emerged during the crisis and when the crisis goes away, so will he”.

The Prime Minister accused SYRIZA of cultivating a sense of insecurity and instability and argued that his cabinet has taken all the necessary steps to overcome the crisis, aside from the public debt. Mr. Samaras noted that by taking steady steps, Greece will produce the necessary surpluses in 2015 for a better deal.

When asked about the rumored changes in New Democracy and the creation of a new party named “New Greece”, Mr. Samaras was vague and avoided giving any definite answers.

As for Golden Dawn, the PM echoed New Democracy’s secretary Andreas Papamikos’ opinion, who claimed that the neo-Nazi party should not be banned. The Prime Minister agreed and argued Justice will prevail that nobody from his cabinet is engaged with the case.