Editorial: The need for one policy, one voice in dealing with Turkey

The question that arises is what is to be done from now on? Will the effort to normalise Greek-Turkish relations continue or will it be nipped in the bud? 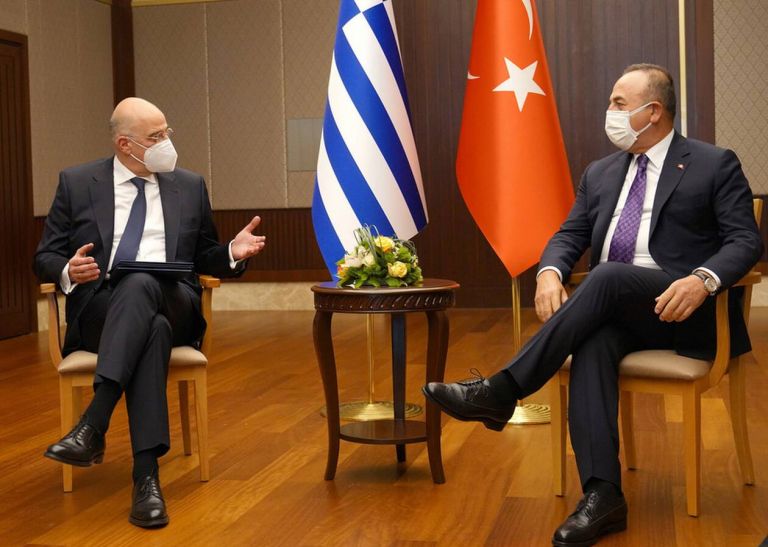 Foreign Minister Nikos Dendias’ visit to Ankara for scheduled talks with his Turkish counterpart, Mevlut Cavusoglu, was obviously designed to expand and bolster channels of communications with Turkey.

On the eve of the visit Turkish President Recep Tayyip Erdogan invited Dendias for talks at his huge presidential complex in Ankara.

Greek diplomatic sources say that the Dendias-Erdogan discussion went smoothly and without any of the Turkish president’s recent public outbursts. Indeed, he is said to have adopted a cordial tone in talking about a bilateral dialogue and seemed to leave open some prospect of a normalisation of relations through talks without third party mediators.

There was, according to the same sources, a similarly positive climate during the Dendias-Cavusoglu talks that followed.

The agenda included an array of low politics and pending issues – which had been raised from time to time in the past but were put on the back burner due to unfavourable conditions – regarding the interconnection, communications, and trade relations between the two countries.

The Greek side hoped that working together on such issues could launch a new period of normalisation in bilateral relations that could lead to a resolution of differences in a future phase.

All that changed when, during joint remarks following his meeting with Dendias, Cavusoglu called members of the Muslim minority in Thrace Turkish citizens.

Nikos Dendias responded immediately by citing the provisions of the Lausanne Treaty that specifically describes the minority in Thrace as Muslim. He underlined that Turkey is a signatory [along with Greece and several other countries] to the treaty.

With his repeated interruptions Mr. Cavusoglu allowed Dendias to deliver a tour de force of public diplomacy and to lay out in the Turkish capital all of Greece’s arguments on critical issues. They include hundreds of Turkish Air Force fighter plane flights over Greek territory, Ankara’s demand that Greece demilitarise Aegean islands, and Turkey’s challenge to Greek sovereign rights in the Eastern Mediterranean and Cyprus.
,
It was the first time that the Greek side publicly offered a complete and comprehensive answer, and indeed on Turkish soil, to Turkey’s unfounded geopolitical claims.

The Greek foreign minister answered his counterpart’s provocation in a direct and clear manner, without hesitation or reservations.

He thus demonstrated that there is no double talk from Athens, and that Greece is prepared to staunchly defend its rights both domestically and abroad.

Undoubtedly, it was a shining moment for Greek diplomacy which all political parties should evaluate and judge and accept that a single policy line and a unified front is required in managing Greek-Turkish differences.

This is all the more true when one considers that Turkey’s reaction cannot be characterised as enraged or inflammatory.

The question that arises is what is to be done from now on? Will the effort to normalise Greek-Turkish relations continue or will it be nipped in the bud?

Greek foreign ministry officials say that despite the intense diplomatic clash in Ankara the effort will continue because domestic conditions in Turkey and the broader geopolitical terrain are not favourable for the cultivation of tensions.

The lesson here, if there is one, is that constant concessions and appeasement are not a solution or an option.

On the contrary, the defence of Greece’s rights and the strict invocation of international treaties and the obligations that they produce for all parties can bring only benefits.