In their joint statement, the 27 ministers stressed that the EU rejects the use of migration pressure by Turkey for political purposes. 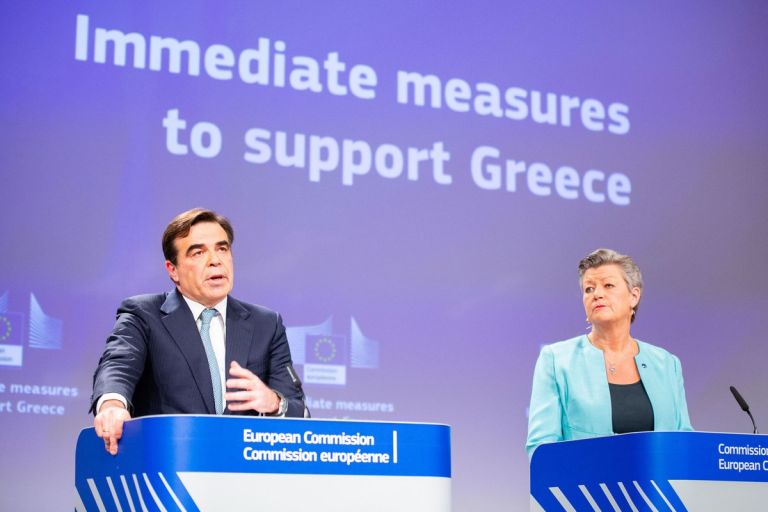 «When Europe is tested, unity prevails. Unanimous support to the EU Commission action plan for Greece by all EU Ministers in extraordinary JHA Council tonight. Full solidarity with Greece. A Europe that protects, a Europe that delivers.”

He had declared earlier that the EU will not be blackmailed by anyone.

In their joint statement, the 27 ministers stressed that the EU rejects the use of migration pressure by Turkey for political purposes.

Croatian Interior Minister Davor Bozinovic, whose country holds the rotating EU Presidency declared, «Our message is clear: We are on Greece’s side. Not just Greece, but any other EU member state that finds itself in a similar position can count on our support and solidarity.»

The European Commission has drafted a plan of measures to provide support to Greece in managing the extraordinary situation at the continent’s external borders.

The measures include deploying an additional 100 Frontex border guards (in addition to the current 530), one aeroplane, one high-speed boat, and three thermal cameras.

Schinas maintained that the 3 March visit of the presidents of the European Council, Commission, and Parliament to the Greek-Turkish border at Evros sent a «resounding message of support” for Greece which is confronted with» an «unprecedented challenge».

The Council issued the following “Statement on the situation at the EU’s external borders:

“The EU Ministers of Home Affairs met today, together with the Ministers of the Schengen Associated Countries, for an extraordinary Council meeting to discuss the situation at the EU’s external borders with Turkey.

“In line with the strong statements of the four presidents of EU institutions during their recent visit to the Greek-Turkish border, the Council expresses its solidarity with Greece, with Bulgaria and Cyprus and other Member States, which might be similarly affected, including in efforts to manage EU’s external borders. The EU will also continue to closely cooperate with the Western Balkans partners in managing migratory flows.

“While the Council acknowledges the increased migratory burden and risks Turkey is facing on its territory and the substantial efforts it has made in hosting 3,7 million migrants and refugees, it strongly rejects Turkey’s use of migratory pressure for political purposes. This situation at EU’s external borders is not acceptable. The Council expects Turkey to implement fully the provisions of the 2016 Joint Statement with regard to all Member States. This Statement produces tangible results, including by supporting Turkey’s significant efforts in hosting migrants and refugees. Both the EU and Turkey stand to benefit from the continuation of this cooperation and commitment.

“The EU and its Member States remain determined to effectively protect EU’s external borders. Illegal crossings will not be tolerated. In this regard, the EU and its Member States will take all necessary measures, in accordance with EU and international law. Migrants should not be encouraged to endanger their lives by attempting illegal crossings by land or sea. The Council calls upon the Turkish government and all actors and organisations on the ground to relay this message and counter the dissemination of false information. The EU will continue to actively fight human smuggling.

“All Member States, the European Commission and EU Agencies stand ready to strengthen their support to areas under pressure, including through the deployment of FRONTEX’s rapid border intervention and additional technical assistance. Member States will swiftly provide the support necessary to ensure the immediate deployment of the relevant teams and assets. The Commission will play an active role in coordinating Member States’ support.

“The Council welcomes the European Commission’s additional support to Greece, notably its commitment to make immediately available EUR 350 million, and the proposal for an additional EUR 350 million to support migration and integrated border management. The Council also welcomes the Commission’s efforts to coordinate the rapid delivery of assistance via the Union Civil Protection Mechanism.
The Council (Justice and Home Affairs) will meet on 13 March to further develop the EU’s response to needs expressed by Greece. The Council and the Commission will continue to monitor the situation and coordinate the EU action, including through the Integrated Political Crisis Response mechanism and other possible coordinating measures, as appropriate.”