Kerry: “The USA will do everything it can to help Greece return to growth” 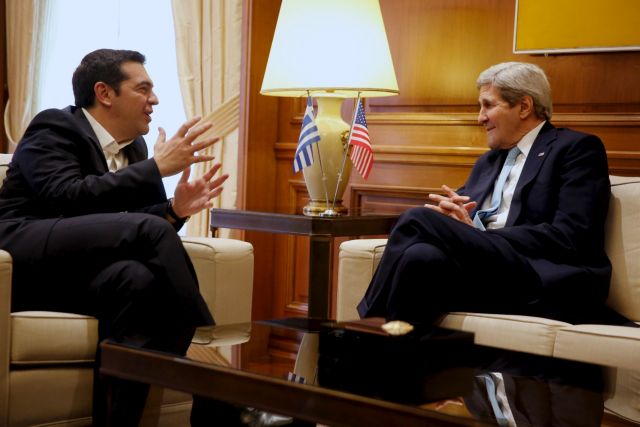 The US State Secretary John Kerry was received by Greek Prime Minister Alexis Tsipras at the Maximos Mansion on Friday, shortly after arriving in Greece.

The Prime Minister welcomed Mr. Kerry’s visit to Greece at such a critical period for the region and told the American diplomat how Greece acts as a ‘hub of stability’ and ‘pole of cooperation’ in the greater region. PM Tsipras stressed the importance and need for solutions to serious problems in the region.

On his behalf, Mr. Kerry pledged US support in assisting Greece exit the financial crisis and return to growth, while praising the Greek government’s efforts. The American official also recognized that Greece is facing major challenges, particularly is relation to the refugee and migration crisis.

The chief of US diplomacy, arrived in Athens today for a series of meetings with the Greek leadership, including Prime Minister Alexis Tsipras at 11:40 and the Minister of Foreign Affairs Nikos Kotzias later on at 12:30.

Mr. Kerry’s visit comes in light of the recent developments on the crisis in Syria and terrorist attacks in Europe. As such, security will be high on the agenda, given the recent rumors of a Greek expulsion from the Schengen zone. Greece’s relations with Turkey in relation to the Cypriot dispute will also be discussed, with the US urging calm. With Turkey’s relations with Russia in crisis, following the shooting down of a warplane, Washington believes that a constructive stance is necessary.

Finally, Athens will also discuss the US support in relation to debt relief. Although the provision of debt relief will ultimately depend on the implementation of reforms and the US will not necessary support an outright write off of the debt, American support will have a symbolic value.