Tsipras: “They cannot demand home auctions when we shelter refugees” 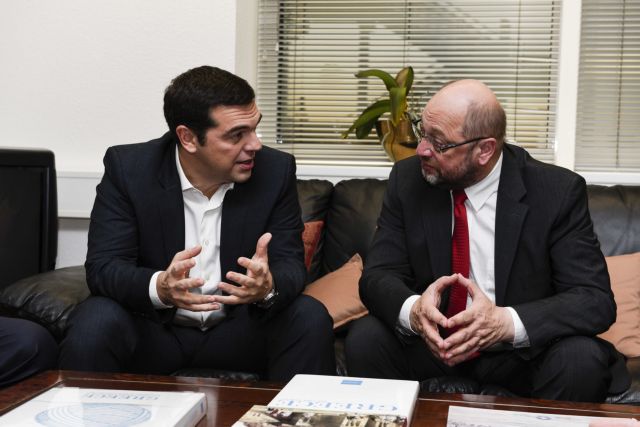 The refugee crisis was at the top of the agenda in the Wednesday morning meeting between Prime Minister Alexis Tsipras and the President of the European Parliament Martin Schulz.

In the press conference that followed the Prime Minister underlined that it is imperative to bring an end to the tragedy in the Aegean Sea, stressing that Greece, which is on the front of the crisis for Europe, has assumed responsibilities far beyond its capabilities. The Greek PM referred to the efforts of the Greek people, particularly on the islands, who are helping out the refugees and saving the honor of Europe.

According to the Greek PM the relocation efforts must be organized and construction of hotspots is nearly complete. Mr. Tsipras also commented on the EU’s need to further develop relations with Turkey and underlined the importance of his upcoming visit to the neighboring country.

Later on the Greek PM referred to “issues related to morality” and argued that at a time when the island residents of Greece are helping refugees, they are asked to raise the VAT to 23%. Mr. Tsipras explained that “while we are forced to provide shelter, even if it is temporary for the refugees, it is not possible to demand that we lift the restrictions on auctions of primary residences”.

“These demands are unacceptable. The Greek government will demand the solidarity that it is demonstrating to the refugees” he further stressed and explained that humanitarian actions are not carried out in anticipation of financial aid. He added that the refugee crisis also highlights the foolishness of those who were making plans for a Grexit over the summer.

In response, Mr. Schulz stated the European Union must support Greece by all means and should be grateful for the Greek government’s commitment to controlling the borders and supporting the refugees. The President of the European Parliament commented that the creation of hotspots is particularly important and recognized that Greece cannot handle such a huge number of refugees on its own.

Nevertheless, the European official added that Athens must stick to what has been agreed to with the institutions, while stressing the importance of building trust with Europe and investors.