Merkel: “Greeks must do their own bit and we have to show solidarity”

The German Chancellor Angela Merkel attempted to downplay rumors of a potential Greek departure from the Eurozone, while… 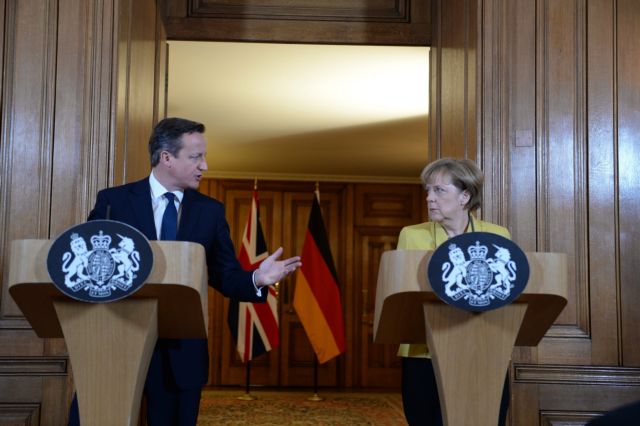 The German Chancellor Angela Merkel attempted to downplay rumors of a potential Greek departure from the Eurozone, while stressing the importance of Athens implementing its loan agreements.

Mrs. Merkel made the comments while in London, where she met with British Prime Minister David Cameron. During a press conference Mrs. Merkel noted that she “has always pursued a policy of Greece staying in the euro zone and that also the commitments that we entered into between Greece and the troika, Greece and European member states, were abided by and respected”.

Additionally, the German Chancellor noted that “Greece has actually made a lot of sacrifices; for many people in Greece these have been very difficult years” while adding that “we’ve come a long way”. She later concluded that she had “no doubt whatsoever in my mind that we’ll be able to bring this to a successful conclusion – always guided by the maxim that on the one hand the Greeks have to do their own bit and on the other hand that we have to show solidarity”.

The comments made by the German Chancellor were first since the publication of an article in German publication Der Spiegel over the weekend, which alleged that the German government is prepared to accept a so-called “Grexit”, should the new Greek government not comply with its loan commitments as stipulated in the bailout agreements.

Meanwhile, German and European officers stress that there are very few chances of Greece being forced out of the Eurozone and that the likeliest scenario is that an agreement will be struck with SYRIZA’s Alexis Tsipras. The German State Secretary at the Federal Ministry of Labour and Social Affairs Jörg Asmussen told Reuters that while premature, he believes that an agreement with SYRIZA is possible.

European officers seem to eject the possibility of a further debt haircut, favor instead the extension of the loans granted by Greece’s EU partners. An unnamed Eurozone officer told Reuters he doubts whether SYRIZA “would become a kamikaze party if they come to power” adding that “they understand they cannot be completely crazy and have to take into account the realities of life”.