Hardouvelis: “The troika will return to Athens in early January”

The Minister of Finances Gikas Hardouvelis told journalists that the troika will return in early January, on his way out from a meeting… 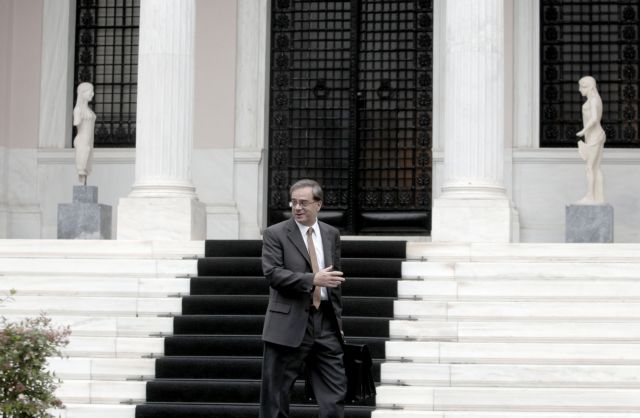 The Minister of Finances Gikas Hardouvelis told journalists that the troika will return in early January, on his way out from a meeting with the Prime Minister Antonis Samaras. Mr. Hardouvelis added that an agreement will be reached by the Eurogroup on the 26th of January and that a deal regarding the budget gap is imminent.

The Prime Minister Antonis Samaras has arranged a series of meetings with top cabinet minister in order to discuss matters of fiscal policy, the public debt as well as the reforms in the public sector. These meetings, with the Ministers of Finances, Administrative Reform and Growth, are also associated to the two-day visit of European Commissioner Pierre Moscovici.

In the first meeting with the leadership of the Finances Ministry, the 2014 budget was being examined. The Ministry’s divs show a 3.5 billion euros primary surplus in November and the government must make preparations for the outstanding troika review of the Greek bailout as well as the enhanced conditions credit line (ECCL).

At noon Mr. Samaras will meet with the Minister of Administrative Reform Kyriakos Mitsotakis and the Alternate Minister of Finances Christos Staikouras to discuss reforms in the public sector. The legislative and wage reforms regarding the public sector will be at the top of the agenda, along with the commitments made by the government.

The Prime Minister is scheduled to meet with the leadership of the Ministry of Growth at 12:30, in order to discuss the implementation of the OECD toolkit proposals, as well as initiatives and reforms that will promote growth in the economy. The government has taken steps to reduce red tape and bureaucracy, however problems affecting competition persist.