Agreement necessary in Paris for troika return to Athens

The Greek delegation in Paris is set to meet troika representatives at the OECD offices in Paris, in an effort to come to an… 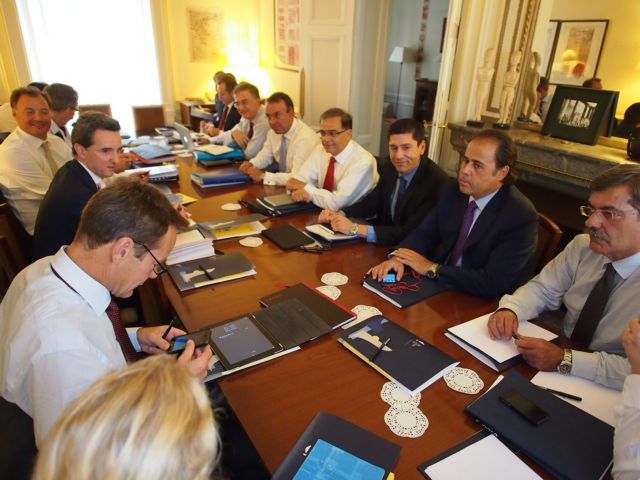 The Greek delegation in Paris is set to meet troika representatives at the OECD offices in Paris, in an effort to come to an agreement that will see the troika mission returning to Athens, in order to complete the review.

The Ministry of Finances’ Gikas Hardouvelis, Christos Staikouras and Giorgos Mavraganis will be accompanied in the Paris talks by the Minister of Labor Yannis Vroutsis, the Minister of Administrative Reform Kyriakos Mitsotakis, along with representatives from PASOK.

On Monday morning, officers from the Finance Ministry claimed that they were “going to end the review and agree upon the framework of the next day”, however they clarified that they do not want to raise expectations and claimed that “it is a positive step, it does not mean the negotiations have ended”.

Meanwhile, a European Commission officer told To Vima that “every effort is made so that a deal can be struck” and stressed that both sides have seemingly reached a compromise in order to initiate discussions and work towards overcoming misunderstandings. The officer added that “the will exists” to end the negotiations, hinting towards a more welcoming stance compared to the IMF.

Contrary to the Europeans, the IMF is not so optimistic in its assessments and insists upon the existence of a huge budget gap. The IMF estimates that an agreement in Paris will not be easy and does not believe that the review will conclude, unless the full troika mission returns to Athens.