Samaras and Venizelos discuss vote of confidence and troika talks 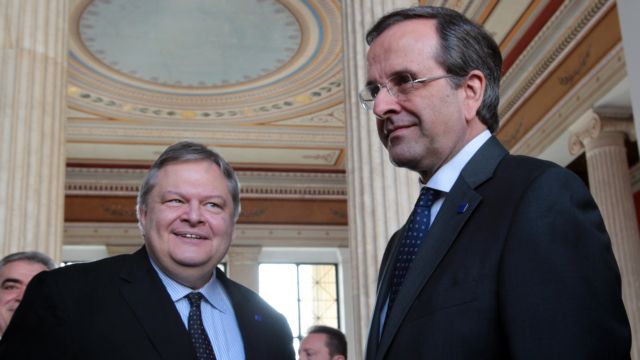 The Prime Minister Antonis Samaras and the Government Vice President Evangelos Venizelos met on Thursday for about two and a half hours to discuss the ongoing troika talks and the decision to request a vote of confidence in Parliament. Tthe Minister of Finances Gikas Hardouvelis was also present at the meeting.

According to the Athens-Macedonia News Agency, the three discussed the progress of privatizations and the ongoing negotiations with the troika, which has returned to Athens for the latest review of the Greek bailout program. Mr. Venizelos commented that “difficulties always exist” but was optimistic that Greece would finally leave the memorandum behind it.

The two leaders also agreed that the decision to request a vote of confidence in Parliament would have a positive impact and expect the coalition to come out stronger. Government spokeswoman Sofia Voultepsi later commented that the confidence vote would be “an answer to SYRIZA and Alexis Tsipras’ bottomless irresponsibility” adding that “the government put an end to the elections rhetoric by determining when the procedure for the President’s elections would start, based on the Constitution”.