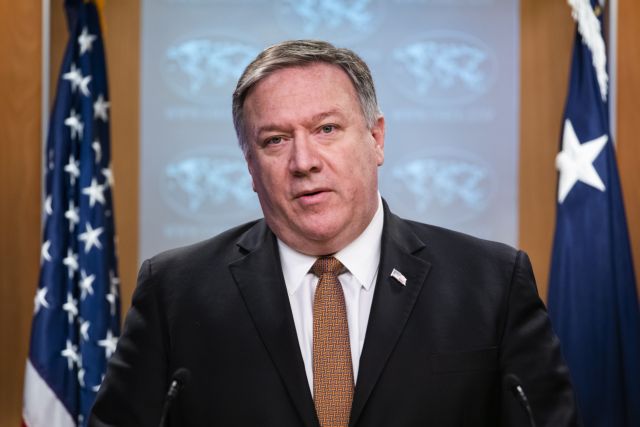 epa07439697 US Secretary of State Mike Pompeo speaks to the media about the International Criminal Court, as well as North Korea, in the State Department in Washington, DC, USA, 15 March 2019. North Korea Deputy Foreign Minister Choe Son Hui told reporters overnight that her country may suspend nuclear talks with the US. EPA/JIM LO SCALZO
Share

The US State Department has announced that Secretary of State Mike Pompeo will be attending the upcoming three-way Cyprus-Greece-Israel summit at which the Eastern Mediterranean Pipeline (EastMed) agreement is scheduled to be signed.

The summit will focus on energy, military, and broader regional cooperation.

“The rest of the Eastern Med is moving forward in exploring and exploiting for the benefit of their people – Greece, Cyprus, Turkey, Egypt, Israel – those resources. It would be regrettable if the people of Lebanon were denied, as a result of Hizballah and others, their ability to join in this as well. We stand ready to help,” a senior State Department official told reporters today.

Pompeo will also be visiting Lebanon which has a maritime border dispute with Israel.

The State Department said that the Secretary will attend the summit to discuss basic energy and security issues faced by the Eastern Mediterranean.

Pompeo’s presence lends a greater weight to the summit as it underscores Washington’s interest at the highest levels at a time when Turkey is attempting to raise obstacles including military impediments to gas and oil drilling in Cyprus’ Exclusive Economic Zone.

Washington considers the southern corridor for the transport of gas and oil to the EU to be of exceptional importance, so as to significantly curb Europe’s energy dependence on Russia.