Hochstein urges Greece to take advantage of its energy opportunities

The Special Envoy and Coordinator for International Energy Affairs leading the Bureau of Energy Resources (ENR) at the U.S… 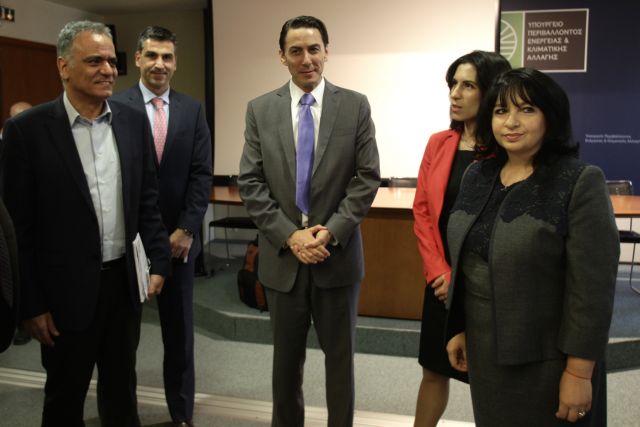 The Special Envoy and Coordinator for International Energy Affairs leading the Bureau of Energy Resources (ENR) at the U.S. Department of State Amos Hochstein has urged the Greek government to quickly make its decisions regarding the TAP pipeline, in an exclusive interview for To Vima.

Mr. Hochstein – who is currently in Athens for talks on energy, cooperation and security – underlined that Greece must take advantage of the opportunities, in order to assume a role in the regional energy game. The official argued that the US wants to support Greece, which is part of one of the ‘more interesting’ energy plans in Europe.

On Wednesday the American official has arranged to meet with the Minister of Environment and Energy Panos Skourletis and the Bulgarian Minister of Energy Temenuzhka Petkova [pictured right] in order to discuss the Interconnector Greece-Bulgaria (IGB) natural gas pipeline. The IGB pipeline, he noted, could offer some leverage for the TAP pipeline, so that Greece is not merely a transit country, but a ‘real player’ to offer a solution for energy security in Central an Eastern Europe.

The next phase in the cooperation between Bulgaria, Greece and the USA is to reach a mutual understanding on the finances and technical difficulties that need to be overcome, so that a final investment decision can be made to move on with the construction of the IGB. This will be first step for further pipelines from Serbia to Romania and Moldovia, thus linking Greece to the rest of the market.

Although Mr. Hochstein recognizes that there are funding difficulties for the IGB in Greece, he is nonetheless confident that a formula will found in order to attract the necessary foreign investments. Mr. Hochstein added aside from the pipeline, the further expansions of capabilities and LNG facilities in Greece are important.

Mr. Hochstein spoke of the ‘bigger picture, stressing that the existing and planned LNG facilities, along with the IGB and TAP pipelines are able to give Greece a dominant role in the region in energy. This in turn will send a clear message that Greece is open for business and investments.