Karatzaferis: I will not resign from party over offshore investigation 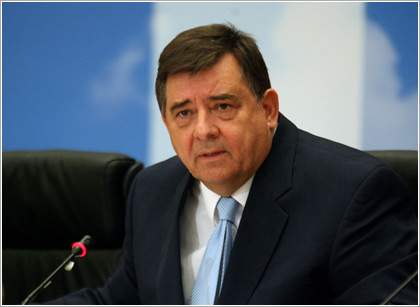 The President of the populist far-right Popular Alarm (LAOS) party Giorgos Karatzaferis has stated that he will not resign from the leadership of his party in relation to an investigations that are being carried out to clarify his implication in two off-shore companies that appear to have been used in the purchase of Super Puma helicopters.

Mr. Karatzaferis appeared on ANT1’s morning news program on Tuesday and clarified that he “will not back down, not submit and not compromise. The matter is a personal issue and does not concern the party”, before stressing that he does not intend to resign from the party’s leadership.

The two off-shore companies, Catalina International Ltd (which was later renamed Sunlight Delight in 2009) and Homeric TCI both appear to belong to Mr. Karatzaferis and relatives. According to the Real News daily newspaper about 1,650,000 million euros were circulated via Catalina International that were later used to purchase the helicopters.

Mr. Karatzaferis has denied his involvement in the case and that he is completely unaware of the details in the Real News report. The political leader has stated his willingness to resign from the party’s helm in order to facilitate the investigations. Former LAOS officer and current New Democracy MP and spokesperson Adonis Georgiadis commented that he was “very troubled” by the case, but noted that “it is inconceivable for a politician to have an off-shore”.

While Mr. Karatzaferis’ party failed to make it in Parliament in the 2012 elections, his party bounced back in the recent European elections, receiving 2.7% of the vote. The LAOS President has submitted an appeal at the electoral tribunal, claiming that the provision of having to collect 3% of the vote to enter the European Parliament is unconstitutional, vying for one of the seats that Golden Dawn received.

Despite having seen prominent party members (Adonis Georgiadis and Makis Voridis) abandon his party for New Democracy in recent times, Mr. Karatzaferis had expressed a willingness to cooperate with New Democracy in upcoming elections. With the possibility of early elections looming, LAOS was considered a potential ally of New Democracy, however the recent developments have suspended any such talks.