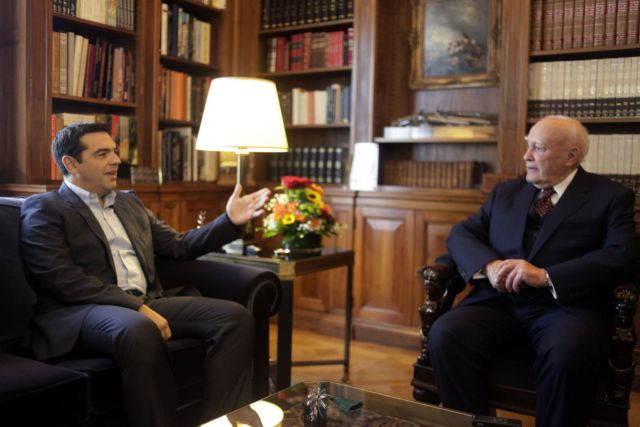 The scheduled meeting between President Karolos Papoulias and SYRIZA leader Alexis Tsipras took place at 14:45 on Monday, with the President requesting a “minimum consensus of political forces” in order for Greece to tackle its major political domestic and international problems.

The President argued that the political forces must be united and face the problems together, noting that “we will div out everything else”. Mr. Tsipras appears to have been caught off guard by the President’s request and responded that this matter would be discussed “in detail” later, after the journalists and news crews departed.

Mr. Tsipras agreed that a bare minimum political consensus was necessary to move forward and underlined the importance f the Greek people deciding which path to take. Prior to the President’s call for a consensus, Mr. Tsipras called for elections, stressing that “the choices we have ahead of us are critical” and that “the situation in society remains difficult, very difficult”, adding that “we must send a message in the country that birthed Democracy, that Democracy is not a danger”.

To Vima has been informed that the opposition leader asked the President to consider convening a council of political leaders. Mr. Papoulias is scheduled to receive the Prime Minister Antonis Samaras after the oath-taking ceremony of the new ministers of National Defense and Growth, as well as DIMAR leader Fotis Kouvelis on Tuesday.