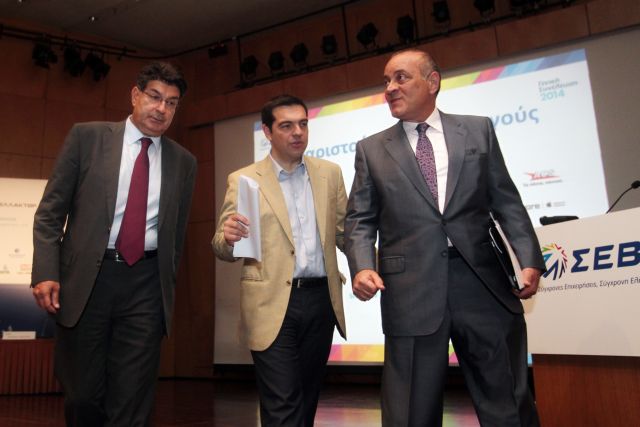 The leader of the opposition Alexis Tsipras delivered a speech at the annual general of the Hellenic Federation of Enterprises (SEV) just three days after SYRIZA’s election victory where he argued that the coalition government “has neither the moral, nor the political legitimacy” to appoint a new Governor at the Bank of Greece or a new Greek Commissioner at the EU.

Mr. Tsipras called the Federation’s leadership to develop a “working institutional relationship” with his party, to which recently-elected SEV president Theodoros Fessas responded positively. Outgoing president Dimitris Daskalopoulos argued that “the Left and the modern business class must come to an agreement for the recovery of domestic production”.

In his speech Mr. Tsipras cited international media reports claiming that SYRIZA’s victory will be beneficial for Greece in the upcoming debt relief negotiations. The SYRIZA leader repeated his call for general elections and stated that the coalition government is “legislating against society” and with the bailout commitments it is binding future generations in the name of a “so-called negotiation”.

Mr. Tsipras stressed that the Samaras-Venizelos administration has no right “to carry on and make any deals in major negotiations” and that it cannot ignore the opposition and first party in the appointment of a new central banker or Greek EU Commissioner.