Crete: Digital journey to the Nazi prisons of Agia 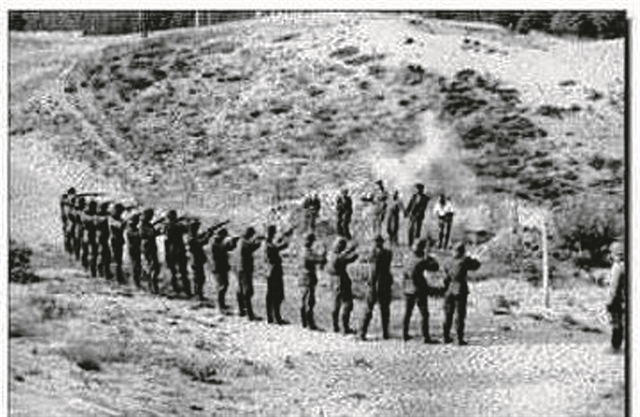 In Crete in 1941 there was no turning back as if you were entering the war against the Nazi occupiers. However, the airborne landing of the Germans during World War II under the code name “Unternehmen Merkur” (Operation Mercury) against the island did not frighten the Cretans, who put up an unexpectedly strong resistance against the numerically superior Germans.

It did not cause any trace of fear in the women of Crete either, who, wearing their traditional headscarves sariki  and holding their guns in their hands, shot the German paratroopers without hesitation. The torture, executions and pain they knew would follow did not deter anyone from giving their own battle with the Resistance.

The battle fought in Crete by its women is reminiscent of a different Zalongos, when Souliot women danced off a cliff to avoid capture by the Turks. A dance that took place in the ballroom of death, full of dignity and honor, superiority and moral greatness. Their desire to fight for this Holy Place was so great that even the Germans themselves had been flabbergasted as soon as they discovered that little girls were hiding behind the sariki. “My surprise was about to peak, when pulling his sariki to make him lie down, half a meter of black hair came out. Only then did I realize that she was a woman. I was silent. It was something I did not expect. I felt a knot in my throat chocking me. It was the first time I realized that the fate of the paratroopers would be very difficult in Crete. I left, leaving my thoughts under the old olive tree, near the dead girl,” wrote a German paratrooper.

The above incident took place near the prisons of Agia in Chania and is recorded in the book of Nikos Makrygiannis, “Crete 1941, The twilight of hope”. It is one of hundreds of incidents of heroism, by ordinary people, patriotic fighters who were then tortured and killed by the German occupiers.

All this created and still creates an unfulfilled obligation to Crete, to erect monuments dedicated to the heroes that unfortunately have not been imprinted anywhere until today.

The history of Crete is world famous. However, it may not be so well known that in the current prisons of Agia there are 12 cells that are not used. They were the “cells of those sentenced to death”, of the fighters against the conqueror who would be executed. There they spent their last days, there they were tortured, there they waited for their destiny. And a few meters further on a plot that was named for obvious reasons “Golgotha – Calvary”, the executions took place. That place has a very high historical, cultural and emotional burden. Those who have visited these cells hear the voices of those waiting execution, the screams of the tortured, the hope that something will be done and they would be saved, but also the unquenchable passion for the freedom of the homeland. And a detail that perhaps few know. Konstantinos Mitsotakis, the father of the current prime minister, passed through the prisons of Agia. He was twice sentenced to death, was initially imprisoned in the Venetian prison of Firka, was transferred to Agia and was released in March 1944.

This place could only become a Museum. A dream come true for Alex. Papaderos, president of the company for the Establishment and Administration of the Museum of the Battle of Crete. A dream that will come true as with the decision of the general secretary of Anti-Crime Policy, Sofia Nikolaou, the 12 cells and “Golgotha” will be restored in order to highlight the historical memory through the Museum but also to build a Temple at the place where the fighters of the National Resistance were executed.

The goal is to highlight the cells by creating a “digital” Museum, in which anyone can travel from their computer screen. In this digital journey, those who wish to do so will have the opportunity to “enter” the “death row cells” located on the northeast side of the jail. To see the “Hell of Crete” and to feel awe reading the moving inscriptions and messages of the those awaiting execution in the cells. These scratches were covered and should now be restored. “After the war, the walls were covered with stucco. In combination with the humidity, there was a destruction of the marks of martyrdom of the period 1941-1945. The investigations that were carried out showed cracks under the stucco and now these very moving messages must be restored, something that will be awe-inspiring”, Mr. Papaderos emphasizes in “NEA”.

As the cells are part of the Chania detention center, there could be no physical presence at the Museum. However, its highlighting through digital applications could take on dimensions similar to those of Auschwitz, a shocking place of martyrdom.

“It was the duty of the State to cede the death row cells. Historical memory and the struggle of the Cretans must not be left in the dark. It is a legacy for future generations, and what we want is to highlight this unique history of our homeland”, the secretary general of Anti-Crime Policy, Sofia Nikolaoue emphasized speaking to “NEA”.