The bi-annual report projects growth of 2.1 percent of GDP for 2019 and 2.0 percent for 2020, whereas the government’s projection is 2.2 percent for each of the two years. 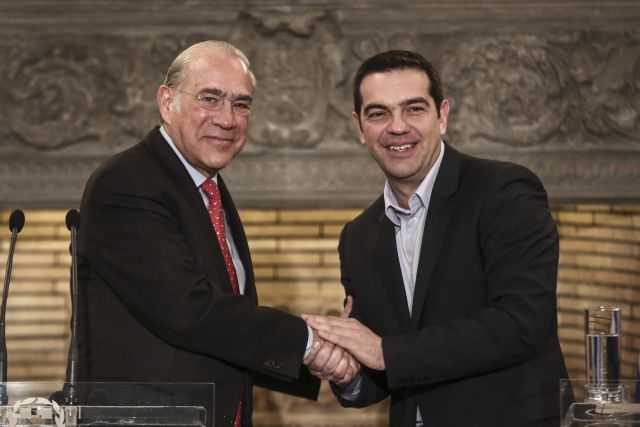 The government got a yellow card from the Organisation for Economic Co-operation and Development (OECD) as regards the economic stimulus package announced by PM Alexis Tsipras on 8 May, which it said could jeopardise the country’s fiscal credibility.

In its bi-annual report, the OECD’s 2019 growth projection for Greece was lower than the government’s.

The report projects growth of 2.1 percent of GDP for 2019 and 2.0 percent for 2020, whereas the government’s projection is 2.2 percent for each of the two years.

The OECD also expresses concern over the slow pace of privatisation, the law protecting homes from foreclosure, and the hike in the minimum wage.

The report says that divergence from the existing medium-term fiscal strategy would pare back the gains in fiscal credibility made over the last years.

It also underlined that delays in reforms designed to improve the investment climate, competitiveness and the situation with Greek banks pose the danger of a downward slump in the projected rise in investment.

The report cites measures that have already been implemented and their impact on revenues and pensions.

It also notes a plan which has not been approved by creditors for smaller primary surpluses which would be guaranteed by the cash buffer (created with money from creditors and national funds, mainly from taxation) in the event that the payment of certain loan instalments to creditors and bond coupons could not be covered.

Infrastructure must be the focus

The OECD underlined that future fiscal measures should give priority to investment in infrastructure, the development of skills, combating poverty, and improving the effectiveness of public expenditures and audits.

The report underscores that in order to improve competitiveness, grow businesses, and achieve medium-term fiscal targets what is needed is swifter progress in implementing reforms, bolstering public administration, developing the framework for the extra-judicial settlements of disputes, and the privatisation of state energy assets.