The situation in Idomeni remains tense, with thousands of migrants being stranded in the northern Greek town and unable to… 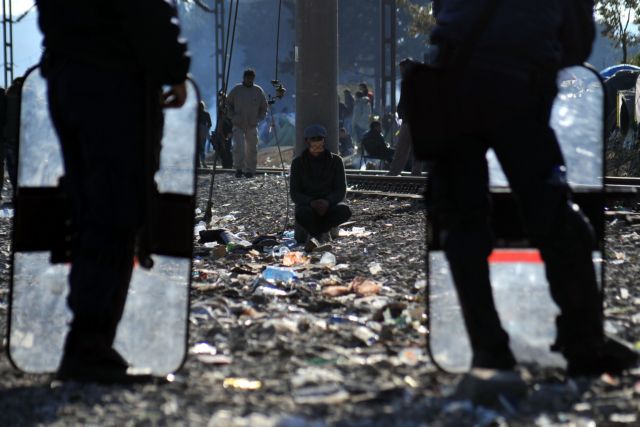 The situation in Idomeni remains tense, with thousands of migrants being stranded in the northern Greek town and unable to continue their journeys by crossing through FYROM. The Greek authorities had given them a three-day deadline to leave the area that expired on Sunday, however only a few hundred reluctantly got on the buses back to Athens.

Thousands of refugees and migrants gathered near the border crossing with FYROM, in hopes of being along to move on, however the neighboring country has recently set up a fence and declared that only Syrian, Afghani and Iraqi passport holders will be allowed to go through. Last week clashes broke out with the police, as desperate migrants were not allowed to continue traveling.

The Alternate Minister of Migration Policy Yannis Mouzalas was confident that the remaining migrants and refugees would soon leave Idomeni. Mr. Mouzalas stated on Mega Channel that a major effort is made to avoid any violence, but underlined the need to maintain the rule of law and stressed that it was unacceptable for the train line to be unusable for the past 10 days, as refugees and migrants have occupied it.

According to the Alternate Minister, any migrants returning to Athens will be able to claims asylum, however he estimated that many will not do so, as they would rather return to their countries of origin by their own means. Mr. Mouzalas lamented that “forced returns and deportations” will unfortunately be carried out. He also admitted that Greek authorities face many challenges in managing the crisis, but efforts are being made, such as in accommodating and processing minors who arrive without any guardians.

Additionally Mr. Mouzalas disputed the recent rumors of a possible Greek exclusion from the Schengen Area that was widely reported last week, claiming that issue was never posed at the recent summit meetings in Brussels. The Alternate Minister underlined that isolationism and ‘national solutions’ such as building walls do not help, since the problems at hand are fundamentally European.

Mr. Mouzalas also revealed that a request has been submitted for 1,600 Frontex officers to be deployed in Greece, in an effort help alleviate the stress on the borders. Nevertheless he was highly critical of Frontex, which called for ‘observers’ from the so-called ‘Republic of Macedonia’ to participate in the screening and registration process on the Greek side of the border. The Alternate Minister explained that it was unacceptable and called the European Commissioner for Migration, Home Affairs and Citizenship Dimitris Avramopoulos to address the situation.