Tsipras: “The people will write history on Sunday” 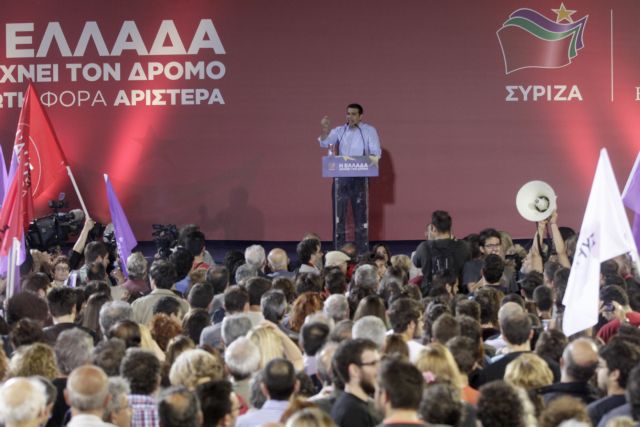 The leader of the opposition Alexis Tsipras gave his main election campaign speech before a crowd of tens of thousands in Omonia Square on Thursday evening and estimated that “the people will write history on Sunday”.

Mr. Tsipras accused the coalition government partners New Democracy and PASOK of adopting a divisive discourse and acting as agents of German Chancellor Angela Merkel. The SYRIZA leader repeated his party’s “electoral dilemma: SYRIZA now or never-ending austerity, dignity now or never-ending subservience” and urged his audience “to stop them, it is a matter of survival”.

In his speech Mr. Tsipras promised to restore wages and pensions, invest in upgrading public healthcare and education, reducing taxation, protecting the public nature of water, ports and beaches among others.According to the SYRIZA leader the coalition government parties “never negotiated [with the troika], they only conspired with them to remain in power” and argued that “the bailout government humiliated Greece in Europe”.

The opposition leader remarked that the European elections on Sunday “are the referendum for the bailout that never happened” and that “it will be as historic as the one from 40 years ago that expelled the palace and kings from the country”.

Mr. Tsipras accused the government of scaremongering and adopting a far-right discourse to appeal to Golden Dawn voters, while making references to the Baltakos scandal. The SYRIZA leader noted that fascists are “the long arm f the system, that is why they flock, converse and meet in secret at the Maximos Hall with Mr. Samaras’ system”.