‘I want to underline that the natural environment suffered a substantial catastrophe and certainly we must be concerned that there was such an [enormous] fire in mid-May,’ the PM said. 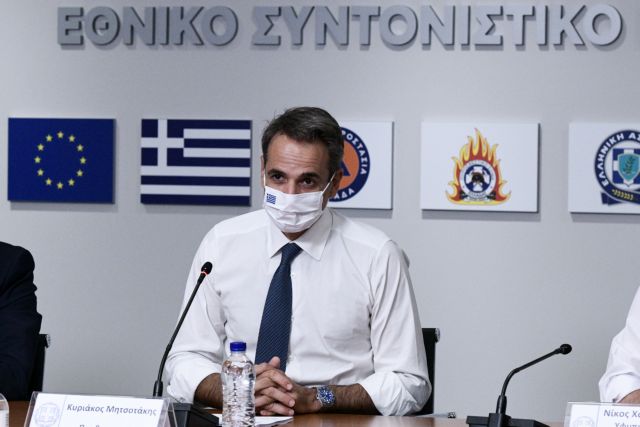 Speaking after the huge destruction of a massive wildfire in the Corinth region, Prime Minister Kyriakos Mitsotakis asked Greece to brace for a tough summer as regards wildfires.

The fire destroyed an estimated 7,000 hectares of forestland.

“Attica is the epicentre of our efforts firstly because it is Attica [population 3.7mn] and because we must heal the wounds left by “Medea” in terms of the huge volume of trees that have still not been cleaned up,” he said, speaking at the Civil Protection Bureau headquarters in a teleconference with 11 Attica mayors who cumulatively must deal with 18 dangerous loci.

“We already had the first major forest fire in the Corinth region. The immediate response of the state fortunately saved lives and to the extent possible limited losses. The process of alerting and removing residents wherever necessary operated in an exemplary fashion and compensation for those who suffered losses is going forward.

“I want to underline that the natural environment suffered a substantial catastrophe and certainly we must be concerned that there was such an [enormous] fire in mid-May. The statistics indicate that something like this [in magnitude] has not occurred in the last 25 years.”

“I want to underline that it is extremely important that the Civil Protection Bureau has pinpointed 18 areas in 11 municipalities that have dangerous characteristics as urban areas neighbour with forests. We need special operational plans for all 18 that as I understand it have been drafted. Obviously, our paramount aim always is to protect human life and property,” Mitsotakis said.

“We have made the best possible preparations at the level of the central state and the Fire Department. I believe our cooperation again this year will be impeccable in order to limit as much as possible at least in Attica the impact of any fire that we will have to manage,” he declared.

“The climate is changing behaviour and so we must change ours as well. It is inconceivable in the fire-fighting period to have a farmer burning branches in a field. Municipalities and associations of farmers should launch an information campaign. We should not forget that each year perhaps the greatest percentage of fires with which you [mayors] must grapple derives from human negligence.”