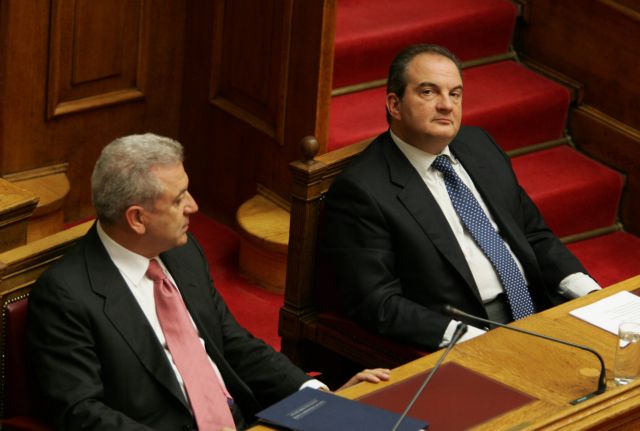 The early general elections scheduled for the upcoming Sunday were prompted after the parties in Parliament were unable to elect a new President. With SYRIZA tipped to come win the elections, considerations have begun regarding the new President.

The Prime Minister Antonis Samaras met with European Commissioner and New Democracy VP Dimitris Avramopoulos [pictured left] on Monday evening, amidst rumors that SYRIZA may propose the later as its Presidential candidate. Mr. Avramopoulos has been diplomatic when asked about the rumors, claiming that he is focusing on his duties as European Commissioner, frustrating New Democracy officers who expected greater support from such a prominent member.

Meanwhile, the Minister of State Dimitris Stamatis repeated the government’s support of Stavros Dimas’ candidacy on Vima 99.5 FM and argued that the “so-called flirt” between Mr. Avramopoulos and SYRIZA was being carried out for PR reasons. Mr. Stamatis further claimed that SYRIZA’s candidate will turn out be the party’s former leader Nikos Konstantopoulos, whom New Democracy does not intend to support.

SYRIZA candidate Nikos Voutsis told Alpha 98.9 FM that it was normal for Mr. Avramopoulos to be on speaking terms with the main opposition “which is something that Mr. Samaras himself did not do”, further fueling rumors that the radical leftist party is considering such a candidacy. While SYRIZA officers underline that there have not been any formal discussions for the Presidency, a senior officer told To Vima that their candidate will be a “unifying choice”.

Such a unifying choice may be the former Prime Minister and New Democracy president Kostas Karamanlis [pictured right]. While Mr. Karamanlis has rejected such offers, his candidacy could provide the unifying elements that SYRIZA is searching for. As with Mr. Avramopoulos, Mr. Karamanlis has adopted a more moderate political outlook than current PM Antonis Samaras, who has been accused of implementing far-right policies and beliefs.

Another potential Presidential candidate from the center and right that SYRIZA may be considering is Prokopis Pavlopoulos. The former New Democracy minister has been at odds with government policies since 2008, denouncing the bailout for conflicting with the Constitution and striving to manage police intervention following the murder of Alexis Grigoropoulos in 2008. Mr. Pavlopoulos ha also been critical about Germany’s stance on Nazi reparations and the occupation loan.