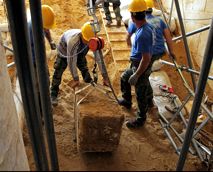 The Ministry of Culture has responded to rumors regarding the skeleton that was discovered in the Amphipolis tomb and announced that the preliminary investigation has revealed that the bones discovered belong to five different individuals.

According to the statement about 550 bones were discovered, including a human skull in very good condition. After a careful scientific investigation, it has been determined that the bones belong to five individuals. Some bones belong to horses, but further zooarcheological research is necessary.

The five individuals buried appear to be one woman over the age of 60 (to whom most of the bones recovered belong to), two men aged between 35 and 45 years old (the youngest of whom seems to have suffered fatal knife injuries), a newborn infant and one more person, who identity has not yet been determined, but is likely an adult.