Pan-Education demonstration to take place in Athens at noon

There is a tense climate in education lately, due to the precautionary lockout that the Rectors decided ahead of the celebrations… 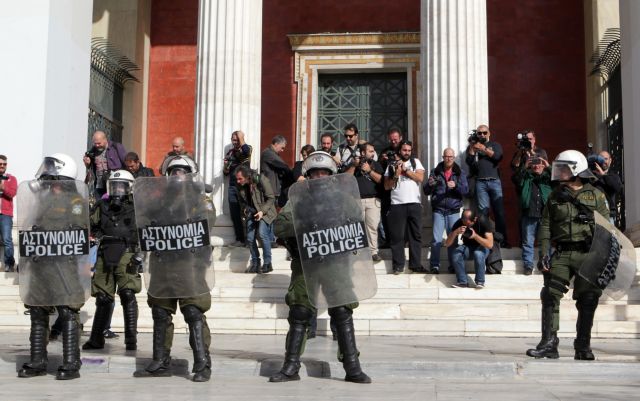 There is a tense climate in education lately, due to the precautionary lockout that the Rectors decided ahead of the celebrations of the 17 November anniversary.

Following the clashes with riot police outside the Law School and the Technical University in Athens on Thursday, students in Thessaloniki occupied the administration building at the University of Thessaloniki. According to preliminary reports, the students entered the administration building early on Friday morning, where the Rector’s office is located, and removed the security guards.

Meanwhile, many student unions and associations have called for mass participation in a pan-educational demonstration that has been scheduled for noon outside the Propylaea in down town Athens. The students denounce the “authoritarianism and police state”, in reference to police conduct on Thursday.

The administrative employees of the University of Athens are also participating in the demonstration and accuse the Rectors of shutting down the Schools and blocking student union decisions.

University professors have also announced that they will join the demonstration at Propylaea at 2pm, in response to the Ministry of Education’s plans regarding understaffed schools and the proposal to pay teachers with accreditation points.

The Dean of the School of Economics and Political Sciences has criticized the Rector of the University of Athens Theodoros Fortsakis for the presence of riot police units outside university buildings. The Dean stresses that the riot police officers violently pushed away students who were demonstrating peacefully, injuring some of them in the process.