Stringent measures will apply at airports, ports, railroad stations and long-distance buses, where travellers will need to prove they are either permanent residents returning to their homes 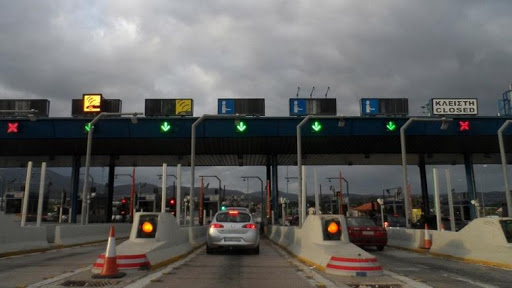 Greece tightened measures on Wednesday to control the spread of coronavirus by stringent controls at national highway toll stations, ports and other long-distance travel stations, ahead of the Greek Orthodox Easter holidays.
During the daily briefing with professor Sotiris Tsiodras on coronavirus statistics in Greece, Civil Protection Deputy Minister for Crisis Management Nikos Hardalias said that stricter control went into effect as of 18.00 on Wednesday.
He warned that anyone who tries to get around the curfew and goes through tolls, roads leading to the national highway and main roads in and out of cities, will be turned back, their car plates removed for 60 days and a fine of 300 euros imposed.

Ports, t
The same stringent measures will apply at airports, ports, railroad stations and long-distance buses, where travellers will need to prove they are either permanent residents returning to their homes or belong to exceptions: armed forces and security personnel, medical and nursing staff, Civil Protection secretariat staf, and personnel of critical infrastructure of the state. He also said there is to be no inter-island travel, with few exceptions (residents of remote islands going to doctors at a larger island, e.g.).
All measures will be in effect to April 27, until further notice, and will be enforced on a 24-hour basis, he said.
Hardalias also spoke particularly of two issues, related to work permits and the arrival of the Sacred Light on Easter. Employers who grant permits to break curfew to people who are not gainfully employed will be fined 10,500 per person, and the person carrying the license will be criminally prosecuted.

Easter Holy Fire
In addition, he warned the president of the municipalities union (KEDE) to convey the message that home delivery of the Sacred Light of Easter is unacceptable and raises issues of public health. As Easter services are behind closed doors and televised this year, some towns had announced earlier in the day that they would deliver the light of resurrection door to door. People need to understand that such a move «would invalidate our efforts so far» to contain the virus.

The Health Ministry’s coronavirus spokesman and infectious diseases professor Sotiris Tsiodras said 245 health workers are on sick leave and 101 are on self-isolation, responding to a question on infected medical and nursing staff in Greece, during the televised briefing on the course of the coronavirus on Wednesday evening.
He also pointed out that many of the health workers may have been exposed to the virus not in their workplaces but in the community, at the start of the outbreak.

Wed. stats
The professor also announced 52 new confirmed cases of Covid-19 in Greece in the last 24 hours, and 2 new deaths.
The Covid-19 infections total in Greece stands at 1,884. Of these, 509 were people infected abroad and 708 were infected in Greece.
Deaths total 83 since the start of the outbreak, of whom 87 pct had underlying health issues and their average age was 70 or over.
Some 84 patients are being treated in Intensive Care Units. The average age of these patients is 67 years, 20 pct are women and a 77 pct have underlying issues.
A total of 14 people have so far been discharged from ICUs.
So far 32,528 diagnostic lab tests for Covid-19 have been carried out nationwide.

A European program on sample testing of coronavirus dispersion and antibodies formation in the general population will be carried out in two phases, Deputy Health Minister Vassilis Kontozamanis said on Wednesday during the daily briefing of the disease’s progress in Greece.
The program will begin after Greek Orthodox Easter throughout in Greece, Kontozamanis said. Support for test-taking is provided by European funds and the private sector, supplying the cars, fuel and equipment necessary for drivers and nurses.