ELSTAT – Inflation at 5.1% in December 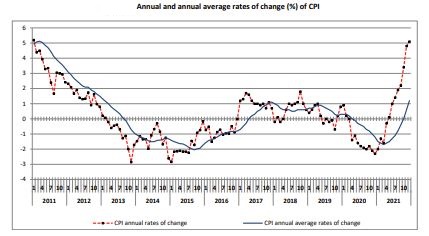 The “champion” in increases was again the price of natural gas, which jumped by 135.7%, followed by electricity with 45% and the price of heating oil, recording an increase of 34.1%

Inflation rose to 5.1% in December 2021, according to official ELSTAT data.

The “champion” of the increases was again the price of natural gas, which jumped by 135.7%, followed by electricity with 45% and the price of heating oil, recording an increase of 34.1%.

The increase of the harmonized index of consumer prices by 4.8% in our country in December, according to the latest data of Eurostat, was a harbinger of this development, something that was essentially confirmed by the Minister of Finance Christos Staikouras. 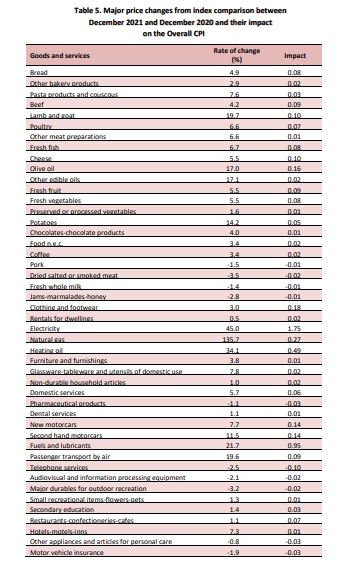 The main issue is the impact on the economy from the significant increase in prices, mainly in energy, but also in a number of basic products.

The increase of the General CPI by 5.1% in the month of December 2021, compared to the corresponding Index of December 2020, came mainly from the changes in the following groups of goods and services:

1. From the increases of the indicators by:

-4.3% in the group Food and non-alcoholic beverages, mainly due to the increase in prices of: bread, other bakery and confectionery products, pasta, beef, lamb and goat, poultry, meat preparations, fresh fish, cheese, olive oil , other edible oils, fresh fruits, fresh vegetables, preserved or processed vegetables, potatoes, chocolates, other foods, coffee. Part of this increase was offset by the reduction of prices mainly in: pork, cold cuts, raw raw milk, pastries-jams-honey.

-18% in the Housing group, due mainly to the increase of prices in: residential rents, electricity, natural gas, heating oil.

-2.3% in the group Durable goods-Household items and services, due mainly to the increase of prices in: furniture and decorative items, glass-tableware and household utensils, household goods, household services.

-10.9% in the Transport group, mainly due to price increases in: new cars, used cars, fuel and lubricants, airline passenger tickets.

-0.9% in the Education group, mainly due to the increase in the prices of secondary education tuition fees.

2. From the reductions of the indicators by:

-0.1% in the Health group, due mainly to a reduction in prices for medicinal products. Part of this decrease was offset by the increase mainly in prices for dental services.

-2.5% in the Communications group, due mainly to a reduction in prices for telephone services.

-0.6% in the group Leisure-Cultural activities, due mainly to reduction of prices in: audiovisual equipment-computers-repairs, durable leisure goods. Part of this decrease was offset by the increase in prices mainly for small leisure-flowers-pets.

-0.6% in the group Other goods and services, due mainly to reduction of prices in: other items of personal care, vehicle insurance premiums.

As the detailed data of Eurostat reveal, in December in Greece the price increases in the energy sector amounted to 34.8%, when in the euro area an increase of 26% was recorded. But the index of food, beverages and tobacco in our country increased by 3.4% in December, which proves that the rise in energy prices has a very large impact.

The issue of high prices, with forecasts talking about maintaining high prices for at least another 6 months, is of great concern to the government’s financial staff. In fact, the statements of government officials that there will be interventions in an effort to reduce high prices are increasing day by day, putting out of question any reduction for VAT on products.

Meanwhile, the market expects new increases of 5% to even 20% in a number of basic products, which will hit the pockets of thousands of households throughout Greece.

It seems that the inflationary pressures will continue for a long time, causing big problems for households and businesses, at a time when energy prices are “rallying” again. In fact, market sources say that inflation in January will exceed 6%!

At the same time, the BoG is sounding the alarm bell for the course of inflation, predicting that consumer prices will increase more than three times compared to the government’s forecasts contained in the budget, according to its interim report, which was published on December 22, 2021.

In fact, he speaks of a jump in the consumer price index to 3% in 2022, when the government forecasts only 0.8% within the text of the budget. The downward trends will start at the end of 2022, leading the Harmonized Index of Consumer Prices close to its central trend, which for Greece is 2%. In 2023 it is estimated that this index will fall below 1%.

It is worth noting that the BoG governor essentially predicts that high prices will be present throughout 2022 and not just the first months, as the government claims.