The tragic path of the vicims who were entrapped

The fire was moving with incredible speed. The area above Argyra Akti became a deathtrap. Most streets led to a dead end or were so narrow that cars could not pass. 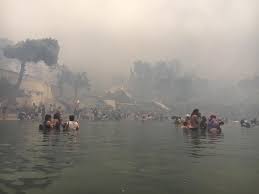 Share
As the days pass and the wildfire tragedy fades from the light of publicity, there is a greater need for all Greeks to remember what happened on the afternoon and evening of 23 July. The route toward death for many began on Marathonos Avenue, where police shut down traffic on the avenue and created an automobile detour to the narrow streets of Mati.
Authorities were alerted shortly before 6pm about the detour at the following points:
On Marathonos Avenue near Fleming Street in the direction towards Marathon, at the juncture of Marathonos and Chrysostomou Smyrnis Street going towards Marathon, at the juncture of Marathonos and Agias Marina’s street, in the direction towards Athens, and on Poseidonos Street near Kokkino Limanaki (little red port), in the direction towards Marathon.
Many now charge that this detour was a criminal error. An account of an Athens doctor made available to in.gr says exactly that. The doctor was directed towards Mati by Traffic Police. He got lost in the narrow streets for quite a while. As he drove around in the chaos, the flames began to approach him. He called his wife and said that he is in a difficult position. “Kiss the children for me. I may die,” he said, and his wife expected the worst. The doctor by chance managed to escape at the last moment, and to find the path that led him to survival.
Panagiotis Hamilothoris did not manage to find such a path. He was returning from work and was directed towards Mati, where he got lost and died tragically.
On the contrary, the former General Secretary of the Greek Communist Party (KKE), Aleka Papariga, entered the flaming labyrinth by car, and she was saved because an acquaintance who knew the area directed her out of the town.
One driver recorded on his cell phone the moment that Traffic Police cut off traffic at the juncture of Marathonos and Fleming Street, which leads to both Rafina and Mati, via Dimokratias Street.
At the same time, there is a recording of communications of Traffic Police that were at the scene, and urgently asked for traffic not to be directed toward Nea Makri or toward Kokkino Limanaki on the coastal road.
In fact, according to the accounts of policemen, many drivers did not follow instructions and insisted on passing, citing the danger to their properties.
Even as Marathonos Avenue was closed in the direction of Nea Makri, Dimokratias Street remained open toward and from Mati, while Fleming Street was burdened by cars coming toward Marathonos from the port of Rafina, as ships were arriving and debarking regularly until 7pm, when the tragedy had occurred.
All those who wanted to drive towards Athens were directed in the opposite direction, via Agias Marinas Street.
The bottleneck
Within a few minutes, hundreds of cars were directed toward Mati, resulting in incredible bottlenecking in the narrow streets which led nowhere.
From Dimokratias Avenue, cars that were trapped stayed in the middle of the street. At that spot, about one kilometre from Argyra Akti (silver coast), one finds Agias Eirinis Street, a narrow dirt road that passes by the field in which at least 25 people died tragically.
The policemen directing traffic on Marathonos Avenue were executing orders from above, that proved to wrong, and responsibilities must be attributed.
The correct move would have been not to direct cars towards Mati, but to instruct them to make a U-turn, so as to get away from the area, which was enveloped in flames.
Whoever went the day after the tragedy to the roads leading to the beach, understood exactly what happened. Hundreds of burnt cars were in the middle of the street, with the keys in the ignition and personal effects in the seats, which reflected the panic that prevailed.
Choking in the smoke, disoriented and with no visibility, they abandoned their cars and ran toward the sea. Whoever found a way out ran to the sea. Those who got lost in the streets burned to death. Others died in their cars. Others ran through the fields leading toward the cliff, by Eirinis Street. Other jumped off the cliff to be saved from the flames, as the 13-year-old girl who died.
The fire was moving with incredible speed. The area above Argyra Akti became a deathtrap. Most streets led to a dead end or were so narrow that cars could not pass.

Photographs and videos vividly depict what happened that night. The death route ended on the streets: Poseidonos, Dimokratias, Parou, Panormiton Tinou, Argyras Aktis, and Mykonou. That is where a cemetery of cars and people was left

Regarding the 25 deaths in a field on Agias Eirinis Street, the group had found a passageway on the property that led to the beach. The fence at the end had a small door and a narrow cement path. They never reached it. They were choked by the smoke and burned a few metres from their possible escape, many of them embraced.
Vasilis Kanellis