Tsipras said that the activity of Greek shipping companies contribute significantly to Greece’s GDP, as in 2017, foreign currency inflows from shipping exceeded 9bn euros, a 20 percent increase as compared to 2016. 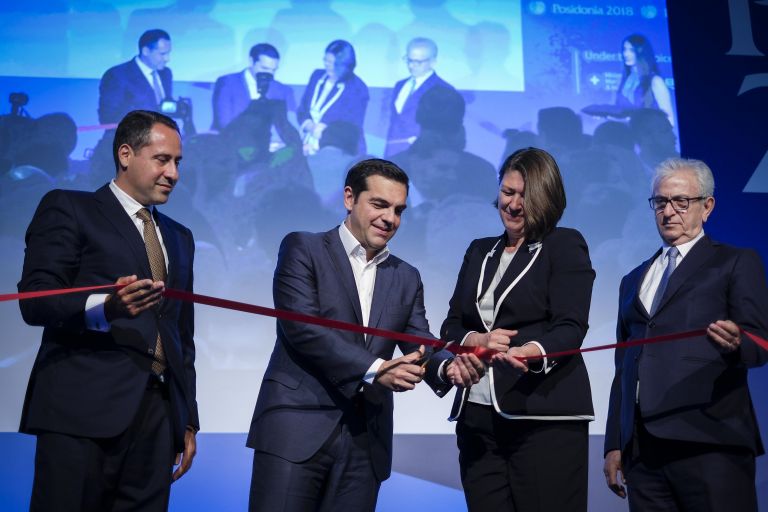 Share
Prime Minister Alexis Tsipras inaugurated the “Posidonia 2018” international shipping exhibition last night in the presence of ministers, party leaders and military top brass, at Spata’s Metropolitan Expo.
“Greece has the largest Merchant Marine fleet internationally, with 20 percent of the global fleet and 50 percent of the European fleet, in terms of capacity, belonging to Greek shipping companies” the PM said.
Tsipras said that the activity of Greek shipping companies contribute significantly to Greece’s GDP, as in 2017, foreign currency inflows from shipping exceeded 9bn euros, a 20 percent increase as compared to 2016.
The opening was addressed by International Maritime Organisation Secretary-General Kitack Lim, European Commissioner for Transport Violeta Bulc, and the Union of Greek Shipowners President TheodoreVeniamis.
«We must ensure that the opportunities that arise from top contemporary international trends like digitalisation, artificial intelligence and the so-called fourth industrial revolution are carefully incorporated in shipping, with care and respect for security issues, environmental protection, international trade practice, and the management of human resources. Greece remains one of the most pro-active members of the IMO, contributing stably and substantially on all issues addressed by the Organisation, in creating policy and on technical issues,» Lim said, thanking the Greek government and shipping community for their dedication to common aims.
European Commissioner Bulc noted that, “We have a duty to ensure that our shipping sector will remain secure, sustainable, and competitive, and will continue to offer many good jobs, on ships and on land.”
“The European Union is your collaborator on all levels, and I hope that we shall continue to collaborate as effectively. I am certain that Greece’s long shipping tradition and rich know-how will prove invaluable assets in our common aim of placing the European shipping sector on a more profitable course,” she added.
For his part, Vemiamis extolled the role of shipping in promoting global prosperity, and as the foundation for the development of the broader shipping industry. He said it is necessary for societies, politicians and legislators internationally not to place disproportionate responsibilities on shipowners, as compared to other industries, for horizontal environmental issues.