The project will significantly reduce the subsidies paid by all consumers – the so-called Social Benefits Services charge on electricity bills nationwide – for the electrification of the islands. 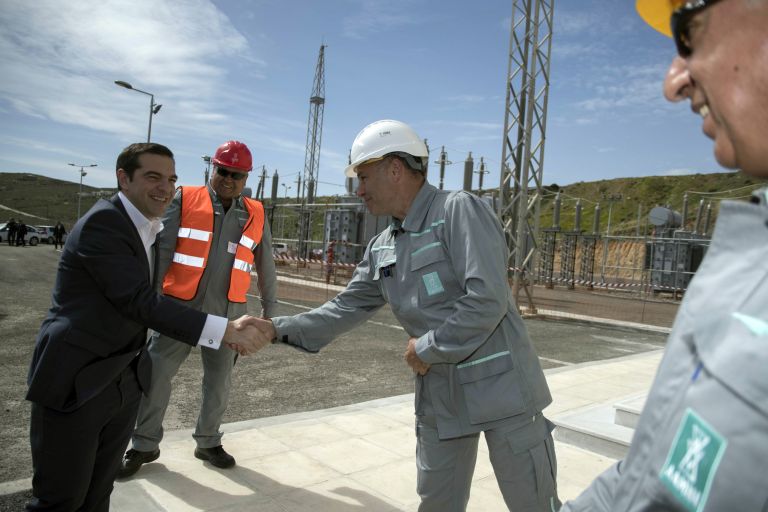 Prime Minister Alexis Tsipras extolled the financial benefits of the planned connection of the mainland electricity grid with the Cycladic islands, while on a trip to the island of Syros.

Tsipras said his government managed to launch a project that was for years mired in bureaucratic delays and which will offer the Cycladic islands an important push toward development, in an environmentally proper framework.

The first phase of the project is being launched now, and the next phases will proceed over the next two years, resulting in three billion euros in savings over the next 20 years.

The project will significantly reduce the subsidies paid by all consumers – the so-called Social Benefits Services charge on bills nationwide – for the electrification of the islands.

The connection will provide adequate electricity to the popular Cycladic islands during the peak tourist summer months, while phasing out costly local plants.

The project is valued at 245 million euros, and will be funded by Greek national funds, EU funding, and European Investment Bank funds, and the annual benefit is projected at 80 million euros, according to the government.

“The Cycladic interconnection is a very important transmission project for the Greek transmission system from both the technical and economic point of view. It is the first of its kind in terms of the number of the interconnected islands, the length and depth of the submarine cables, the technologies utilised and the transfer capacity required. The project is under construction and refers to the connection of the islands of Andros, Tinos, Syros, Mykonos, Paros and Naxos to the mainland (Lavrion) in order to ensure the secure and reliable supply of the islands; it will also allow the gradual dismantling of the existing local power plants in the long–term. The project offers high economic benefits as it allows the substitution of expensive electricity produced by the local power plants by significantly cheaper electricity transferred from the mainland,” according to a study by HRO-Cigre, the International Council for Large Electric-Power Sytems.

Tsipras announced that the Neorio shipyard in Syros will reopen with a new investor, a development he said signals economic recovery in manner that is immediately palpable for citizens. The investors are reportedly American and the facility may be used by the US Navy.