The night of Saint Nicolas* 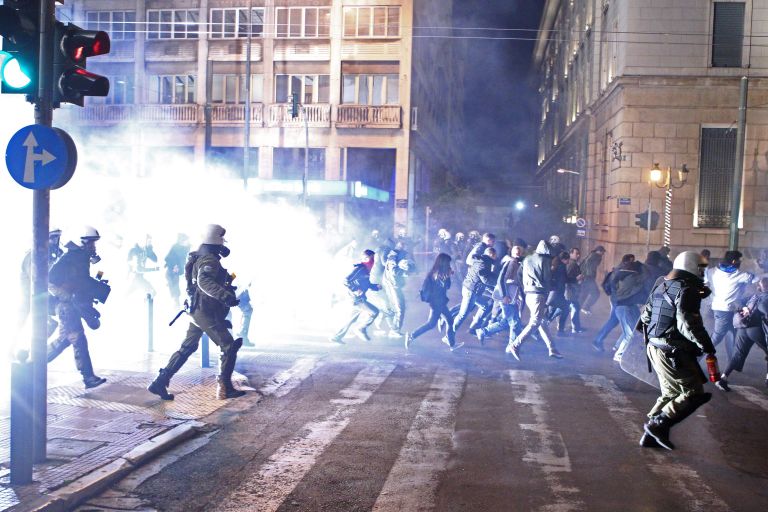 On the festive Saturday evening on the 6th of January – the day of Saint Nicolas – there was nothing to foreshadow the storm that was to come.

The weather was nice, the celebration was major and as usual, there was a lot of traffic in the center of Athens, with people going to the theaters, cinemas, clubs, bars and cafés.

Up until about 9pm, when the unexpected and fateful occurred. All it took was for some harsh words between youths and the police on Mesolongiou Street, in the volatile and “free” after years area of Exarchia, for the situation to escalate and a bully officer raised his gun and fired, killing the first person in the way. Whether the bullet ricocheted or not is of little importance.

Between 9 and 10 pm, when the death of teenager Alexis Grigoropoulos by police fire was being publicized, the atmosphere was electrified.

The bad news quickly made the round in center of Athens and suburbs thanks to mobile phones and the Internet. In a short time students and young people started gathering in the scene of the crime and on Exarchia Square.

Almost immediately, angry anarchist and leftist groups started to create a volatile environment in the university buildings of the city center, at the Law School, Athens Polytechnic, Pantion and School of Economics.

The anger against the police was overflowing and the clashes started almost immediately in Exarchia before spreading.

By midnight the violent clashes with the police had multiplied, the arson and looting of stores was widespread in the center of Athens.

Many young people, as if prepared for some time, overcame their hesitations that night and three stones at the police, while the more aggressive set fires and smashed stores and cares.

Anyone in the center of Athens could feel the tensions and the environment of unrestrained youth violence which caused the fateful event. You could see it the eyes and the unhinged actions. Most of the catastrophes took place n the historic commercial section of Athens, between Syntagma and Monastiraki, from young people, as they headed out for the evening in the bars and clubs of Psyri.

Athens seemed like a bombed out city on Sunday morning. The violence however carried on for days and spread to all the other urban centers in Greece, from Crete and Peloponnesus, to Thessaly, Epirus and Macedonia.

Students also attacked police departments. On Tuesday 9 December, the catastrophes were even greater and were accompanied by the looting of stores, where migrant groups living in the center of Athens joined in.

That is how the youthful explosion went massive and nationwide. The phenomenon later allowed for the revival of extreme groups as they found many willing to participate in more organized acts of violence and terrorism.

It is no coincidence that after the December clashes, the successors to the 17 November, the Revolutionary People’s Struggle and other groups, regrouped and gave birth to new, groups capable of carrying out coordinated attacks against many targets. As of then attacks are carried out on symbolic targets in the center of Athens along with arson attacks against banks, state organizations and political offices.

All of this allowed many to speak of a social phenomenon and foreigners, mainly Europeans, linking it with the international economic crisis and treating it as a precursor to the generalized social explosion, capable of spreading and threatening Europe as a whole.

The explanation of the facts in any case is not simple, nor is the death of Grigoropoulos enough to explain the intensity of the riots and dispute. Anyone closely following Greek politics and developments in the youth will realize that there is a historic substrate and preparations had take place.

Greece has a tradition in such conflicts. Similar events took place in 1965, before the dictatorship. Then, due to influence of royalist and parastatal groups, radicalized sections of Greek youth which cited Che and the Cuban revolution acted in a similar way in July, during the so-called Apostasy. Hooded youths at the time clashed with the police and smashed stores.

Similar machinations took pace during that period, ahead of the wave of guerilla warfare in Europe, with various groups preparing to forms armed groups in Athens to fight the police state and political persecutions. The planning was suddenly interrupted when the military dictatorship took place in April of 1967, only to resume around 1970 and formed the basis of the far left resistance groups that fought the dictatorship. Those anti-dictatorial groups birthed 17 November and the Revolutionary People’s Struggle groups after the restoration of Democracy in 1974.

Since then far left groups have operated in universities and among the youth. At times they had the ability to act and others they would disappear, before spreading doubt against the system.

In the past 5 or 6 years the existing leftist anti-systemic wave has reemerged. It found an international expression in the anti-globalization movement, took advantage of the ideological and political retreat of official parties, as well as the problems in education, inequalities and limited job prospects, allowing for a dynamic presence in the universities.

Anti-capitalist and resistance groups, based on the idea of autonomy, were formed in most university schools in Greece, allowing for the creation of a powerful dispute mechanism, outside of the control of the official Left.

These groups are responsible for the occupation of university buildings in recent years and the actions against the creation of private universities. They draw inspiration from the myth of May of 1968 and want to maintain a historical link with the similar wave of dispute that developed in 1979, when the conservative Rallis government attempted to impose changes on the universities.

Anarchist groups joined up with these peculiar, autonomous and extra-parliamentary forces in the marginalized areas of Athens and the disenfranchised youth.

In the past December the anti-systemic forces met up and formed a major front of dispute against the police, the government and systemic forces such as the media. The coincidental crisis supported their actions and made the anti-systemic and anti-capitalist message clearer and easier to spread among the youth. In other words the murder of Alexis Grigoropoulos acted a lit fuse on volatile substrate.

A lot has change in the four months after those terrible events. The economic crisis is getting worse, affecting even more, while the State is retreating, the system is in dispute, the credibility of politics is hitting rock bottom, the youth is in uproar, crime is on the rise, the instances of political violence and terrorism are multiplying, fear and insecurity are firmly rooted in the mind and soul of many people, the Police and the media are becoming increasingly aggressive and nobody knows what will happen from the next, unexpected and random event like the one from last December in Exarchia.

*This article was written in the Spring of 2009, in the aftermath of the difficult events in December of 2008 and was published in a special edition of the LSE. Since then many events have taken place, the crisis decimated the Greek economy and society and destroyed the political system. Without a doubt those events from December were the preamble of the major crisis that has ravaged Greece for the past eight years and turned out to be the precursor of the major adventure that the entire world is now experiencing.