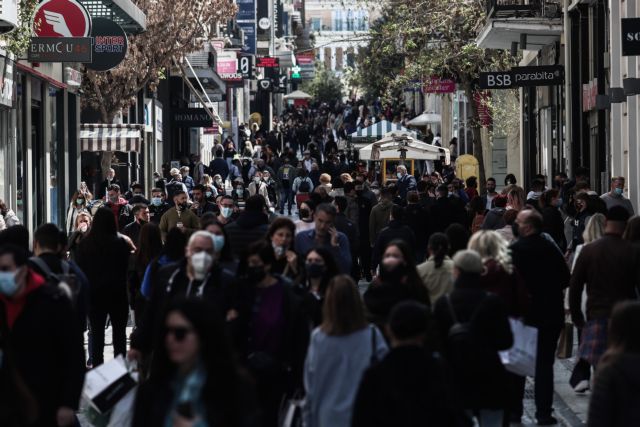 The percentage of vaccinated persons increases with age and educational level

More and more citizens are willing to get the vaccine, according to the findings of a new survey by diANEOsis, in collaboration with the polling company Metron Analysis, which recorded the attitudes and views of Greeks, in the period 5-14 October 2021, for vaccinations and the effects of the pandemic on their lives.

According to the content director of diANEOsis, Thodoris Georgakopoulos, 77% of the research sample (which includes only citizens over the age of 17 who speak Greek) state that they have received even one dose of the vaccine (from 39% in May 2021) while 75% are fully vaccinated.

Eighty-one percent of those vaccinated say they will do the repeat (or “booster”) dose of the vaccine when given the opportunity.

Interestingly, the percentage of those willing to get the repeat dose is very high in all age groups – including the 17-24 group (77%). It is noted that at the time of the survey, 9% of Greeks said they had contracted Covid (up from 6% in May 2021).

The research shows that the percentage of vaccinated people increases with age and educational level, while less than 65% of vaccination rates are shown only by farmers, the unemployed, those who declare their profession as “domestic” and those who live in areas with less than 2,000 residents.

Of those who have been vaccinated, 58% say they decided to do it on their own, while 1 in 4 say they were motivated by their doctor. Moreover, 1 in 4 vaccinated persons state that at first they had decided not to be vaccinated, but then changed their mind.

At the same time a form of normal everyday life is now evolving, in certain aspects of social and economic activities. According to the survey, 83% of employees now work normally in their workplace and only 10% now work part-time. It is noted that in April 2020 only 1 in 4 Greeks worked normally in their workplace – another 1 in 4 worked part-time and the rest were in some form of work suspension or leave.

The individual findings show that Greek citizens are divided into two categories: half believe that Greece is heading in the right direction, while the rest believe the opposite.

However, not all subgroups of the population are equally divided. An important factor that differentiates the result is age: citizens over the age of 65  are more than twice as likely to think we are heading in the right direction as their peers who think otherwise. At the ages of 17-39, however, the percentages are just the opposite. The attitude of younger people is generally more pessimistic about almost all pandemic issues, which is confirmed by other research and other issues, and deserves further investigation. It is also worth mentioning that half of the vaccinated citizens think that we are going in the right direction, while 7 out of 10 unvaccinated people think that we are going in the wrong direction.

Uncertainty (40%) and insecurity (31%) and lastly shame (7%) and self-confidence (5%) are the dominant emotions among Greeks, according to the survey. In general, as has been seen from previous surveys, the majority of Greeks view the phenomenon as something important – from the beginning of the crisis, even with their answers, they show that they take the threat seriously. Three out of four believe that Covid-19 is a “serious threat” to their health, while only 1 in 5 think it is a “common simple disease”. 13.5% of those vaccinated think it is “a simple disease” – but the corresponding div for those who have not been vaccinated is 51.2%. According to the research, the realism of their attitude has come from the denial of the expectations they had in the early stages of the pandemic, for a quick return to normalcy. It is noted that at the beginning of the crisis, in April 2020, the majority of Greeks believed that we would have returned to a “normal daily life” by September 2020. Now half of Greeks (47%) believe that we will return to a “normal” everyday life “after 2022.

65% of Greeks consider “very” or “quite possible” that new mutations will lead to a new burden of the pandemic in the future. At present, about 2 in 3 Greeks consider it “not so likely” or “not at all likely” that we will be led to a lockdown again (however, almost half of the unvaccinated citizens, on the contrary, believe that we will be led to a lockdown). At the same time, however, 2 in 3 Greeks believe that “the worst is over”, and only 1 in 4 believe that “more difficult days are coming”. The results for this question are more or less similar regardless of age and almost the same for vaccinated and non-vaccinated.

A series of questions about the mental and physical health of Greeks in this period were added to the research – in comparison with corresponding data from the pre-pandemic period. Among other things, today 1 in 4 Greek men and women state that in the last 12 months they have experienced anxiety disorders (panic attacks, anxiety) and 1 in 10 that they have depression. 1 in 5 that they have had sleep disorders and also 1 in 5 that they felt melancholy, depression, or despair – a percentage almost double that shown in a similar ELSTAT survey from 2019. The percentage of people aged 17-24 who say they felt melancholy, depression or despair in the last year reached 44%.