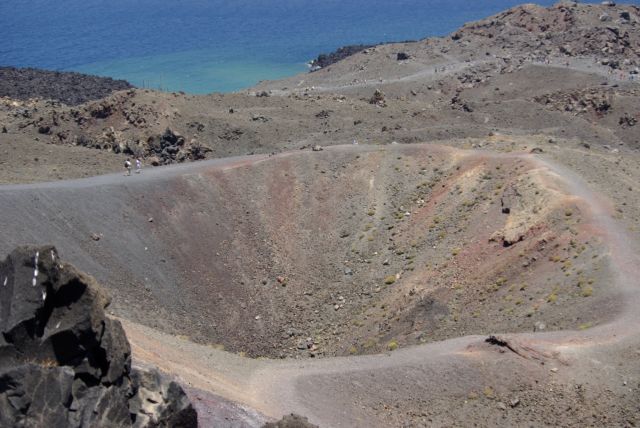 Preparations have already begun feverishly both in Greece and abroad

A large international oceanographic mission to conduct underwater research drilling around the Santorini-Columbus-Christian volcanic complex in the South Aegean has just been approved and will take place from December 2022 to February 2023.

The drillings in six points in the caldera of Santorini and in the wider undersea area of ​​Santorini-Amorgos, which will be done using the oceanographic ship “JOIDES Resolution”, will be carried out in the framework of Mission 398 of the International Ocean Discovery Program-IODP, one of the most ambitious and long-term international science programs in the world.

The specialized oceanographic vessel, one of the largest for research drilling in the world, is scheduled to sail from the Spanish port of Tarragona on December 6, 2022 in the direction of the Aegean and the mission will be completed by February 5, 2023. Fever has already begun. both in Greece and abroad.

The IODP includes 22 member countries with financial support from the United States, Japan, China, Australia, Korea, India, Canada and 14 European countries. Its purpose is to study the evolution of the Earth, as recorded in the sediments and rocks beneath the ocean floor. This is done through deep offshore exploratory drilling and recovery of sediment and rock cores, which are then studied in detail by scientists from around the world.

Such sediments and rocks are records of processes that take place on the ocean floor, in the oceans, and even in the atmosphere. An important feature of sediments in basins around volcanoes – such as those in the Aegean – is that they contain a long, continuous record of volcanic activity. The IODP uses a number of different drilling vessels, but the most important is the “JOIDES Resolution”, which constantly travels the planet’s oceans, carrying out various scientific drilling projects.

Now this big ship will come to Greece as well. After four years of rigorous evaluation, the IODP announced the approval (characterized as “excellent” in fact) of the scientific proposal for conducting marine exploratory drilling in the volcanic complex in the South Aegean, which consists of the volcanic islets of Christians, the caldera of Santorini, Nea and Palea Kameni (where the last eruption occurred in 1950) and the underwater volcano Columbus, near Santorini, which erupted in 1650.

Santorini is an emblematic site, both in terms of volcanology and archeology, due to the great eruption of the Late Bronze Age (the so-called “Minoan eruption”) and its possible impact on Minoan Crete. Santorini’s volcanic activity has been studied in detail by various international scientific teams in recent decades, making it one of the best studied volcanoes in the world. However, the submarine area of ​​the volcano has been much less studied and this is now the goal of the IODP.

Every time one of the volcanoes in the Hellenic Volcanic Arc erupts, volcanic pumice and ash or hot pyroclastic flows erupt that end up in the sea, where they are retained between the sediments, which accumulate at the bottom of the submarine basins. Thus, for several million years, dense successive volcanic deposits and sediments have accumulated at the bottom of the Aegean Sea, providing a complete record of volcanic history. The main objective of the IODP is to reveal the geological history of the area through underwater exploratory drilling.

The research proposal was submitted by thirty scientists from universities and research institutes from several European countries, the USA and Japan, with the participation of many foreign universities, such as Clermont-Auvergne (France), Hamburg (Germany), Oregon and Texas A & M , Kiel, Bristol and Oxford (Britain), as well as Greek Institutions (EKPA, AUTh, ITHABBYK-ELKETHE). The oceanographic mission of “JOIDES Resolution” from December 2022 to January 2023 will include submarine locations in the northeast and southwest of Santorini, as well as in two locations within the caldera.

At each location outside the caldera, the ship will retrieve several hundred meters of sediment core from its bottom n order to obtain a complete record of the geological history. The ship will be manned by about 30 scientists, 25 technical staff and 65 crew members. The main scientists will be Professor T.H. Druitt (France) and Dr. S. Kutterolf (Germany), while the scientist representing Greece, is the associate professor of the Department of Geology and Geoenvironment science of Athens University (EKPA) Paraskevi Nomikos, who has been studying the marine geology of the Santorini region for years.

P. Nomikou (EKPA): “The objectives of drilling are purely scientific”

As she stated to Athenian / Macedonian News Agency, “the volcanism associated with the subsidence at the boundaries of the tectonic plates, can greatly affect the life and the environment of the surrounding areas. A better understanding of island volcanoes and related geo-hazards requires the study of processes leading to volcanic phenomena and their interaction with the marine environment. The Christiana-Santorini-Columbus volcanic complex in the Greek Volcanic Arc is a unique system for dealing with these questions-scientific problems related to volcanism in the marine environment “.

More specifically, according to Ms. Nomikos, the aims of the research proposal are:
– The reconstruction of the complete volcanic history of the complex in the last millions of years.

– The documentation of petrogenesis, evolution and storage of magma in the volcanic complex both temporally and spatially.

– The documentation of the processes, the products and the possible effects of the explosion during the Late Bronze Age in Santorini (Minoan explosion).

– The study of the history, the dynamics and the dangers of the submarine eruptions of Kamena in the caldera and of Columbus.

– The documentation of the transition from mainland to marine environment during the sinking in the Aegean region.

– The search for the presence of microbial life in the rocks of the caldera of Santorini and the area around Columbus, and how it reacted to repeated volcanic eruptions.

Ms. Nomikou pointed out that “the goals of drilling are purely scientific. The diameter of the drill is very small – about 24 cm – and is designed for the recovery of rocks and sediments using different scientific analytical methods. The mission has no commercial or archaeological purposes. “The scientific goal is to better understand what drives volcanic activity and regulates eruptions in this area, which is visited by more than two million tourists annually, in order to better predict eruptions and their effects in the future.”

Drilling inside the Santorini caldera will remain shallow, at a depth of less than 400 meters, much less than the depth of the magmatic chamber which is about 4,000 below the seabed. The drilling will take place in the context of an existing very dense network of seismic profiles that have been examined in detail by geophysicists and IODP experts, in order to avoid contact with possible pockets of gas, oil, or magma. “The engineers of JOIDES Resolution have great experience in drilling around volcanoes and in all safety issues”, P. Nomikou emphasizes.

Each IODP “campaign” with the ship JOIDES Resolution is a significant research investment of about 10 million euros. In addition, the scientific activity in the Aegean will be complemented by an ambitious approach to the public during the mission, which will offer opportunities for young scientists and students to be trained and participate in international research, as well as to the public and schools. so they can learn about scientific findings in real time through social media, through live links and webinars.

The material is going to be studied for many years after the drilling. It is expected that the mission will attract great interest not only in Greece but also worldwide and will introduce young people and the general public to the big questions of Earth Sciences and how they are addressed through major international collaborative projects.

In a letter sent to the Deputy Minister of Research & Technology Christos Dimas and to the Secretary General (GSRT) Athanasios Kyriazis, P. Nomikou and five other Greek scientists who participated in the drafting of the proposal for drilling in the Aegean (EKPA Emeritus Professor Dimitrios Stefanos Kilias, AUTh professor Konstantinos Papazachos, researcher ITHABVYK-ELKETHE Paraskevi Polymenakou and EKPA professor Maria Triantafyllou) ask for the promotion of the participation of Greece in the underwater research activities of the European consortium ECORD (European Consortium for Ocean Research Drilling).

The European Cooperation for Marine Exploration ECORD, part of the International Ocean Exploration Program (IODP), is an administrative structure of 14 European countries and Canada, which aims to conduct scientific ocean drilling for research and understanding. such as climate change, mineral and energy raw materials and geohazards (seismicity, volcanism, tsunami, submarine landslides).

As Greek scientists point out, “Greece’s accession to ECORD is a request of the entire Greek scientific and research community of the sea and will have fundamental benefits” for the country. In addition, this participation – which will be accompanied by a small annual contribution of Greece to funding for the years 2022-2023 – will allow Greek scientists to submit applications for participation in the upcoming mission of “JOIDES Resolution” in the Aegean.